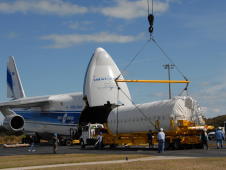 On Cape Canaveral Air Force Station's skid strip in Florida, the crane is being removed from the Centaur stage of the Atlas V rocket after placing the Centaur on the flatbed truck. The Centaur will be transported to the Astrotech facility in Titusville, Fla.
Photo credit: NASA/Cory Huston
Click image for full resolution. 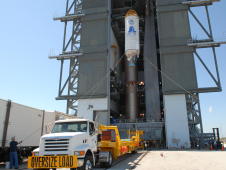 On Cape Canaveral Air Force Station's Launch Complex 41, the crane lifts the Centaur upper stage into the Vertical Integration Facility for installation onto the Atlas V first stage, already in the tower.
Photo credit: NASA/Jack Pfaller.
Click image for full resolution.
"Always the bridesmaid, never the bride," as the old lament goes. For almost 50 years, the Centaur high-energy upper stage rocket has been the behind-the-scenes workhorse of NASA’s exploration of space. Teamed with the Atlas and Titan booster rockets, Centaurs have sent probes to each of our solar system's planets and beyond. Now, Centaur gets its "15 minutes" of fame.

Centaur was the unnamed companion to the Atlas V rocket when it launched from Cape Canaveral, Fla., on June 18, 2009. Their mission: lift NASA's Lunar Reconnaissance Orbiter (LRO) into its lunar orbit. Piggybacking a ride on the Centaur was also the Lunar Crater Observation and Sensing Satellite (LCROSS) that will impact the moon in October. But something is different about this mission for Centaur: instead of quietly parking itself in a long-duration orbit of the earth, Centaur accompanied the two spacecraft on their journey toward the moon. What is more, Centaur will be the center of attention for a few glorious minutes this October.

The main LCROSS mission objective is to confirm the presence or absence of water ice in a permanently shadowed crater near a lunar polar region. Mission scientists have determined that the best way to do this is to send one or more objects into the surface of the moon to generate a large plume that can be studied to determine the presence of water ice. LCROSS is a small spacecraft, and besides not being able to make a major impact, its primary role is to observe a larger impact. That creates the opportunity for Centaur to take center stage. LCROSS, still attached to its Centaur upper stage rocket, executed a fly-by of the moon on June 23, 2009 and entered into an elongated Earth orbit to position LCROSS for impact on a lunar pole. On final approach, the shepherding spacecraft and Centaur will separate. The Centaur will act as a heavy impactor to create a debris plume that will rise above the lunar surface. Projected impact at the lunar South Pole is currently: Oct 9, 2009 at 7:30 a.m. EDT. The Centaur will excavate a crater approximately 20 meters wide and almost 3 meters deep. More than 250 metric tons of lunar dust will be lofted above the surface of the moon. Following four minutes behind, the shepherding spacecraft will fly through the debris plume, collecting and relaying data back to Earth before impacting the lunar surface and creating a second debris plume. For almost 30 years, the NASA Glenn Research Center in Cleveland, Ohio, was responsible for the technical and cost and schedule management of the Centaur rocket. This program had an extraordinary operational success record. It was developed as an upper stage launch vehicle to be used with a first stage booster rocket, the Atlas rocket. Centaur's first mission objective was to send the unmanned Surveyor spacecraft to the Moon. Centaur has been used to boost satellites into orbit and propel probes into space. Mariner, Pioneer, Viking and Voyager spacecraft all got a boost from Centaur and provided invaluable data on these planets. Centaur also helped to revolutionize communication and expand the frontiers of space. In all, Glenn used Centaur for more than 100 unmanned launches. Centaur has quietly continued as the upper stage of the Atlas family of rockets from United Launch Alliance and the retired Titan IV from Lockheed Martin. For each of its previous missions, Centaur quietly did its job and retreated out of the limelight. This time, Centaur is going out in style! Go Centaur! David DeFelice NASA Glenn Research Center Note: NASA’s Ames Research Center, Moffett Field, Calif., is overseeing the development of the LCROSS mission with its spacecraft and integration partner, Northrop Grumman, Redondo Beach, Calif. Read more about Centaur's history.
› Back To Top