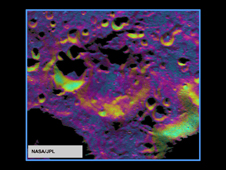 Close up image depicting the slopes or steepness of the walls in Cabeus A.
Click image for full resolution. More Images:
› Potential South Pole Water Concentrations
› Potential South Pole Water Concentrations (Zoomed)
› Composite South Pole Image
› Labeled Composite South Pole Image
LCROSS will search for water ice by sending its spent upper-stage Centaur rocket to impact the permanently shadowed polar crater. The satellite will fly into the plume of dust left by the impact and measure the properties before also colliding with the lunar surface. The LCROSS team selected Cabeus A based on a set of conditions that include proper debris plume illumination for visibility from Earth, a high concentration of hydrogen, and mature crater features such as a flat floor, gentle slopes and the absence of large boulders.

"The selection of Cabeus A was a result of a vigorous debate within the lunar science community that included review of the latest data from Earth-based observatories and our fellow lunar missions Kaguya, Chandrayaan-1, and the Lunar Reconnaissance Orbiter," said Anthony Colaprete, LCROSS project scientist and principle investigator at NASA’s Ames Research Center in Moffett Field, Calif. "The team is looking forward to the impacts and the wealth of information this unique mission will produce."

A cadre of professional astronomers using many of the Earth’s most capable observatories is helping maximize the scientific return from the LCROSS impacts. These observatories include the Infrared Telescope Facility and Keck telescope in Hawaii; the Magdalena Ridge and Apache Ridge Observatories in New Mexico and the MMT Observatory in Arizona; the newly refurbished Hubble Space Telescope; and the Lunar Reconnaissance Orbiter, among others.

During a media briefing Sept. 11, Daniel Andrews, LCROSS project manager at Ames, provided a mission status update indicating the spacecraft is healthy and has enough fuel to successfully accomplish all mission objectives. Andrews also announced the dedication of the LCROSS mission to the memory of legendary news anchor, Walter Cronkite, who provided coverage of NASA's missions from the beginning of America's manned space program to the age of the space shuttle.

"Dad would sure be proud to be part, if just in name, of getting humans back up to the moon and beyond," said Chip Cronkite, son of the famed news anchor.

The LCROSS mission was selected in April 2006 as a mission manifested with the Lunar Reconnaissance Orbiter. Both missions launched on June 18, 2009 on an Atlas V from Cape Canaveral, Fla. The LCROSS mission and science operations are managed at Ames.

"The LCROSS team has long been preparing for its final destination on the moon, and we're looking forward to October 9," Andrews said. "The next 28 days will undoubtedly be very exciting."