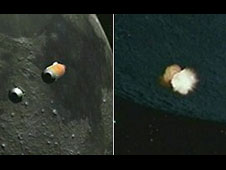 A computer visualization of LCROSS hitting the Moon on Oct. 9th. Credit: NASA
Just imagine. A spaceship plunges out of the night sky, hits the ground and explodes. A plume of debris billows back into the heavens, leading your eye to a second ship in hot pursuit. Four minutes later, that one hits the ground, too. It's raining spaceships!

Put on your hard hat and get ready for action, because on Friday, Oct. 9, what you just imagined is really going to happen--and you can have a front row seat.

The impact site is crater Cabeus near the moon's south pole. NASA is guiding the Lunar Crater Observation and Sensing Satellite (LCROSS for short) and its Centaur booster rocket into the crater's floor for a spectacular double-impact designed to unearth signs of lunar water. There are two ways to watch the show. 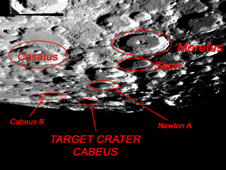 The lunar south pole. Credit: NMSU / MSFC Tortugas Observatory
Click image for full resolution.
First, turn on NASA TV. The space agency will broadcast the action live from the Moon, with coverage beginning Friday morning at 3:15 am PDT (10:15 UT). The first hour or so, pre-impact, will offer expert commentary, status reports from mission control, camera views from the spacecraft, and telemetry-based animations. The actual impacts commence at 7:30 am EDT (11:30 UT). The Centaur rocket will strike first, transforming 2200 kg of mass and 10 billion joules of kinetic energy into a blinding flash of heat and light. Researchers expect the impact to throw up a plume of debris as high as 10 km. Close behind, the LCROSS mothership will photograph the collision for NASA TV and then fly right through the debris plume. Onboard spectrometers will analyze the sunlit plume for signs of water (H2O), water fragments (OH), salts, clays, hydrated minerals and assorted organic molecules. "If there's water there, or anything else interesting, we'll find it," says Tony Colaprete, the mission's principal investigator. Next comes the mothership's own plunge. Four minutes after the Centaur "lands," the 700 kg LCROSS satellite will strike nearby, sending another, smaller debris plume over the rim of Cabeus. The Hubble Space Telescope, the Lunar Reconnaissance Orbiter (LRO) and hundreds of telescopes great and small on Earth will scrutinize the two plumes, looking for signs of water and the unexpected. And that brings us to the second way to see the show: Grab your telescope. "We expect the debris plumes to be visible through mid-sized backyard telescopes--10 inches and larger," says Brian Day of NASA/Ames. Day is an amateur astronomer and the Education and Public Outreach Lead for LCROSS. "The initial explosions will probably be hidden behind crater walls, but the plumes will rise high enough above the crater's rim to be seen from Earth." The Pacific Ocean and western parts of North America are favored with darkness and a good view of the moon at the time of impact. Hawaii is the best place to be, with Pacific coast states of the USA a close second. Any place west of the Mississippi River, however, is a potential observing site. When the plumes emerge from Cabeus, they will be illuminated by sunshine streaming over the polar terrain. The crater itself will be in the dark, however, permanently shadowed by its own walls. "That's good," says Day. "The crater's shadows will provide a dark backdrop for viewing the sunlit plumes." In an earlier stage of mission planning, scientists hoped to strike a crater closer to the Moon's limb so that the plumes would billow out against the dark night sky, providing maximum contrast for observers on Earth. However, recent data from NASA's Lunar Reconnaissance Orbiter, Japan's Kaguya spacecraft and India's Chandrayaan-1 probe altered those plans. "We've just learned that Cabeus may contain relatively-rich deposits of hydrogen and/or frozen water," says Colaprete. "Cabeus is not as close to the lunar limb as we would have liked, but it seems to offer us the best chance of hitting H2O." The LCROSS team hopes many people—amateurs and professionals alike—will observe and photograph the plumes. "The more eyes the better," says Day. "Remember, we've never done this before. We're not 100% sure what will happen, and big surprises are possible." Veteran amateur astronomer Kurt Fisher has prepared a 13 MB slideshow to help fellow amateurs locate and witness the plumes: download it . There is also an online LCROSS observer's group where novices can read introductory articles and chat with other observers. "This is a wonderful opportunity for citizen scientists to join NASA in the process of discovery," says Day, who urges observers to submit their images to the LCROSS Citizen Science Site. "It's a great adventure, and anyone can participate." Imagine that. Dr. Tony Phillips
Science@NASA
› Back To Top