Permafrost on Mars and Earth 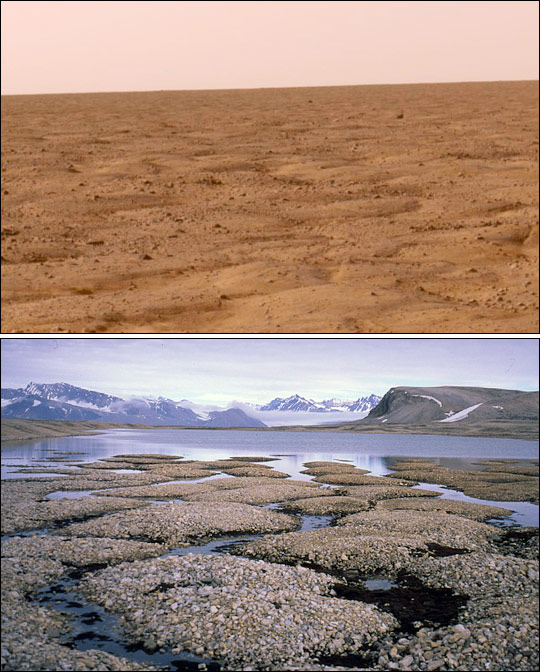 When NASA’s Phoenix spacecraft landed on the Arctic plains of northern Mars on May 25, 2008, among its first looks at the planet’s surface revealed a landscape familiar to polar scientists on Earth: a pattern of interlocking polygon shapes that form in permafrost that freezes and thaws seasonally. These polygon patterns have been captured in images from previous Mars missions, and they are among the evidence that Mars’ polar regions harbor large quantities of frozen water.

This pair of images shows the similarities between the surface of Mars where Phoenix landed (top) and permafrost on northeastern Spitsbergen, Svalbard (bottom). The polygon patterns form in permafrost when the upper parts of the ground thaw and refreeze from season to season. The ground contracts in the winter cold, creating small spaces that fill with melt water in the summer. When winter returns and the water freezes, it acts like a wedge, enlarging the cracks. (Although the Earth photo shows a large amount of surface water, the process could presumably occur beneath the surface with far less water.)

On Earth, permafrost, glaciers, and other frozen environments can preserve organic molecules, bacteria, and fungi for hundreds of thousands, even millions, of years. The Phoenix spacecraft has scientific instruments that will drill into the frozen ground of the Martian Arctic, vaporize the soil sample, and analyze the chemistry of the vapors. Scientists hope to learn whether ice just below the surface ever thaws and whether some chemical ingredients of life are preserved in the icy soil.

The image of Mars was captured by the spacecraft’s Surface Stereo Imager, which sees light in visible wavelengths, similar to the human eye, but also in ultraviolet and infrared. This image was made from a combination of violet and infrared light measured by the imager. NASA's Earth Observatory
› Back To Top