Roll over the spacecraft above to locate Glory's instruments.
Credit: NASA/GSFC
> Larger version 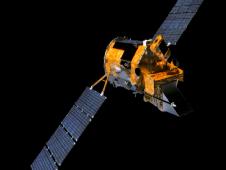 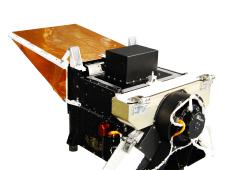 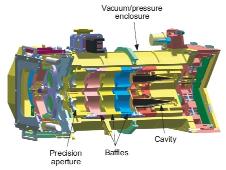 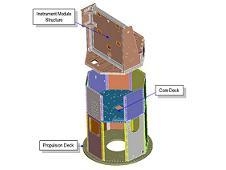 The Glory spacecraft is divided into three key sections: the propulsion deck, the core deck, and an instrument module.
Credit: NASA
> Larger image Two instruments aboard Glory—the Aerosol Polarimetery Sensor (APS) and the Total Irradiance Monitor (TIM) supply information about critical components of Earth's climate system. The APS, which is mounted on the underside of Glory's bus and faces downward, collects information about aerosol properties. TIM, which is located on the opposite side of the spacecraft and faces outward, measures the intensity of incoming solar radiation at the top of the atmosphere.

Aerosol Polarimetry Sensor (APS)
The concept for APS stretches back to the 1970s when James Hansen, director of NASA’s Goddard Institute for Space Studies in New York, conducted studies on the polarization of light from Venus. By studying polarization—a measure of the physical orientation of light waves as they move and twist through space—Hansen and his colleagues managed to deduce the composition of Venus' clouds.

The success of such efforts led scientists and engineers to develop similar instruments to study the Earth. In 1999, NASA developed an aircraft-based polarimeter called the Research Scanning Polarimeter (RSP) that has provided unprecedented detail about Earth's aerosols. The Glory APS, which was built by Raytheon Space and Airborne Systems and has a nearly identical design to the RSP, will be NASA's first polarimeter capable of studying terrestrial aerosols and clouds from space from more than 250 angles, using nine different spectral channels.

The 69 kg (152 lb) instrument views the Earth's surface in 5.9-kilometer ground-track bands and repeats its measurements cycle every 16 days. Light that enters the APS first passes a dual mirror assembly, a series of lenses that collect and focus the beams, and then gets split by a prism into two orthogonally polarized planes that nearby detectors can measure.

Glory carries secondary instruments called cloud cameras that will support the APS by tracking clouds as they pass through the APS' sights. These cameras will help scientists identify partially cloudy scenes that require special analysis.

Though often mistakenly considered constant, the amount of incoming solar radiation striking the top of Earth's atmosphere actually fluctuates slightly as the sun cycles through periods of more and less intense electromagnetic activity. Glory's TIM instrument, a type of radiometer called a bolometer, will maintain and improve what's now a decades-long record of total solar irradiance.

The TIM is an improvement of a similar instrument launched in 2003 as part the Solar Radiation and Climate Experiment (SORCE) mission. The Glory TIM, which was designed by the Laboratory for Atmospheric and Space Physics (LASP) at the University of Colorado, is designed to be 3 times more accurate than previous instruments.

In the past, subtle differences in the design and calibrations of TSI instruments have caused noticeable offsets in the data. In most cases, scientists have had to correct for such discrepancies by matching up data between overlapping missions. While still important, overlapping missions will become less crucial than they previously were because the Glory TIM has been calibrated at a new ground-based facility at LASP called the TSI Radiometer Facility.

The TIM instrument contains four identical radiometers capable of monitoring the sun during the daylight portion of each orbit. It sits on a gimbaled platform that allows mission controllers to aim it toward the sun independently of the orientation of the spacecraft. Scientists at LASP process the data TIM gathers, and post it on the web for use in climate and solar science within days of acquisition.

An octagonal aluminum chassis—or bus—serves as the foundation of the Glory spacecraft. The bus is divided into two mains sections: a propulsion deck at the tail end of the spacecraft and a core deck in the middle. Attached to the core deck, an irregularly-shaped instrument assembly board houses the mission’s two milk-crate sized science instruments, a pair of cloud tracking cameras, a communications antenna, and various other minor components.

On the craft’s exterior, two rotating solar panels, Glory’s means of generating electricity, protrude from the bus like wings. Stripping away the panels that make up the bus reveal the guts of the spacecraft. On the propulsion deck, a large fuel tank is the most prominent feature. The liquid propellant inside—a pungent substance called hydrazine—gets piped to four adjacent thrusters, which ground-based flight operators use to ease the craft into orbit and make occasional corrections to keep it on course.

The core deck is packed with various power control boxes, regulators, and an attitude control subsystem that determines the craft’s orientation in respect to the Earth. The placement of the spacecraft’s battery, strategically put in the heart of the core deck facing Earth, protects it from temperature swings. The attitude control system contains four geared reaction wheels that keep the spacecraft pointing directly downward—at nadir—even as aspects of the orbit change.

In many respects, the Glory spacecraft is fairly unremarkable in comparison to other NASA earth observing satellites. It isn’t the largest or the heaviest, nor does it carry the most scientific instruments. At 1.9 meters (6.23 feet) by 1.4 meters (4.59 feet)—Glory isn’t much taller than most people or wider than a large oil barrel. Glory weighed 525 kilograms (1,158 pounds) at launch, about a tenth the mass of NASA’s flagship earth observing satellite Terra.

But there’s a key detail that makes Glory quite unusual: the spacecraft’s bus was originally designed for the Vegetation Canopy Lidar (VCL), a mission that NASA canceled in 2000 due to a technical glitch in the development of an instrument. Converting VCL—a spacecraft that would have flown in a different orbit, launched on a larger rocket, and faced slightly different conditions in space—into Glory wasn’t always straightforward. Many of the original VCL bus components had to be replaced; the rest had to be recertified to meet the requirements of the new mission.

Telltale signs of Glory’s unique pedigree still persist. The spacecraft’s hydrazine thrusters are significantly larger, for example, than is typical for a mission of its size. And the solar arrays, designed for a different orbit, have an unusual orientation—meaning the spacecraft appears to fly “sideways” in orbit.

Yet four years after engineers first began converting VCL into Glory, mission engineers aren’t losing sleep wondering whether Glory will perform as well as a brand new spacecraft. Many rounds of tests that simulate the conditions the craft will face in space have proven that it should.

A four-stage, solid fuel rocket—a Taurus XL built by Orbital Science Corporation in Dulles, Virginia—will launch Glory into orbit from Vandenberg Air Force Base in California. The spacecraft is to assume a place among a series of earth-observing satellites that track the same line over earth dubbed the A-Train.

After launch, mission operators conduct verification tests for 30-day period and then begin normal data collection for a period of at least three years. Glory orbits in a low-earth orbit of 705 km (438 miles) altitude—about the distance between Boston and Washington, D.C.