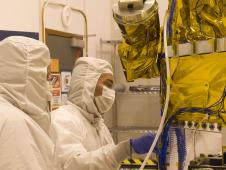 › View larger
Engineers inspect Glory in a clean room at Orbital. Credit: Orbital Sciences Corporation Engineers have faced and overcome a number of unique challenges in recent years while preparing NASA's newest climate-monitoring mission for launch. Yet the engineering has begun to gel, and engineers are now reaching the final stretch of their effort to prepare the Glory spacecraft for launch.

For a few dozen of the engineers who work on the mission, the task begins every morning with an email from NASA mechanical engineer Michael Bruckner. It almost always arrives between 9 a.m. and 10:00 a.m., and the subject line never changes: "Glory I&T Daily Status."

Information and technology often feature prominently in the messages, but Bruckner isn't referring to that kind of IT. "I&T" stands for Integration and Test, the term that engineers use to describe the nuts and bolts job of preparing a spacecraft for the extreme environment of space. A peculiar type of rainbow, not an attempt to boast, inspired the mission's name.

Since the days of the Mercury and Apollo programs, generations of American kids have dreamed of building rockets and blasting things into space. Decades later, seasoned engineers have figured out how to do it remarkably consistently. Yet the task remains extraordinarily complex. And only rarely do engineers get much credit or attention for what they do beyond a core group of specialists.

"You generally only hear about us if we make a mistake," Bruckner said. For manned space flight, it's the astronauts who get the fame and the photo ops. For unmanned satellites like Glory, it's usually the scientists who show up in the newspapers and magazines.

But the reality is that every space mission begins -- or ends -- with the engineering. 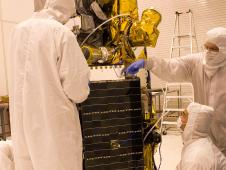 › View larger
Four engineers monitor Glory's solar arrays during a deployment test. Credit: Orbital Sciences Corporation Random samplings from Bruckner's email -- an alphabet soup of acronyms and jargon to the uninitiated -- offer some clues about what's involved in launching a spacecraft safely into orbit. APS is Glory's primary science instrument, the Aerosol Polarimetry Sensor, a device that will measure the shape and composition of airborne aerosols. TVAC stands for "Thermal Vacuum," one of the most important of many types of environmental tests that engineers use to make sure their hardware is ready for space. Usually, it involves repeatedly heating and cooling a component of the spacecraft (or in some cases the whole spacecraft) in a vacuum chamber that simulates the rapid temperature swings that occur in space between day and night. Another test involves putting Glory on a moving platform that shakes the spacecraft vigorously to make sure all the parts can withstand the vibrations of launch.

TIM is the Total Irradiance Monitor, Glory's other main science instrument, which will look for changes in the sun that could affect Earth's climate. EMI stands for a series of tests that ensure a component can withstand electromagnetic environment to the spacecraft's electrical system.

EMI and TVAC tests, as well as many others, are not one-time affairs. "Each component will end up going through these tests multiple times," said Bruckner. "For much of Glory, first the components of instruments, then complete instruments, and finally the entire spacecraft has to go through the same tests." 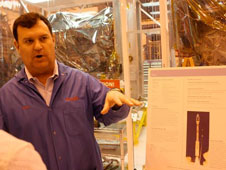 › View larger
Mark Edison, the Glory Program Manager at Orbital, talks about the mission with the spacecraft under wraps in the background. Credit: NASA If there is one thing that aerospace engineers dread and lose sleep about at night, it is probably TFs: test failures. In Glory's case -- and in the lead-up to any mission -- there's been no shortage of TFs to confront. Glory's spacecraft bus was originally designed for the Vegetation Canopy Lidar (VCL) mission, a satellite that NASA canceled in 2000. For Glory's engineering team, retrofitting a spacecraft intended for a larger rocket, different space conditions, and a different orbit has meant extra headaches -- and plenty of extra rounds of troubleshooting.

Unanticipated TFs with flight computers called Payload Interface Processors (PIP) have complicated the integration and testing schedule. In August 2009, TFs had started to crop up, and by December, a computed tomography (CT) scan of the critical component had revealed a flaw related to the manufacturing process that forced Glory's engineering team to find a new vendor and to remake their testing and integration plan.

More recently, a manufacturing problem with one of the solar array drive assemblies -- the SADA on Bruckner's list -- caused trouble. This June, as engineers were conducting a last round of tests at an Orbital Sciences facility in Dulles, Va., before shipping the spacecraft to California for launch, one of Glory's SADAs malfunctioned. This put the engineers up against a wall. Most experts, Bruckner said, estimated that it would take 22 weeks to produce, install, and test a replacement part.

As this bad news was sinking in, a New York City-based engineering firm named Honeybee Robotics proposed an innovative replacement part called a twist capsule. The part, which the company has installed and tested in a mere two months, has remedied the problem.

Both Honeybee Robotics, along with SADA maker Moog Chatsworth Operations, deserve a great deal of credit, according to Bruckner. "We took a part that was not flight qualified, and we managed to design, build, and qualify it in about two months. This is an unbelievable accomplishment," he said.

No Room for Error

"Everything comes down to risk tolerance," said Bruckner. "We have to keep a very careful balance between minimizing every possible risk and keeping a program moving forward."

There is a reason for the cliché about x, y, or z "not being rocket science." Rocket science is unimaginably challenging. And if something does break in space it is difficult -- if not impossible -- to fix it.

"We're all aware that even the smallest glitch or oversight can result in catastrophic failure, so we take the extra time to make sure we get it right,” said Bruckner.

"There have certainly been challenges, but we're getting through them," said Glory Project Manager Bryan Fafaul.

Glory is currently scheduled to launch from Vandenberg Air Force Base in California no earlier than February 23, 2011.