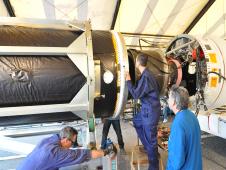 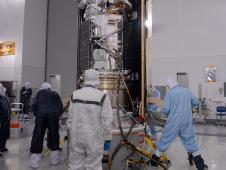 › View larger
Technicians check the placement of the first half of the protective payload fairing that will encapsulate NASA's Glory spacecraft. Credit: NASA/Don Kososka, VAFB 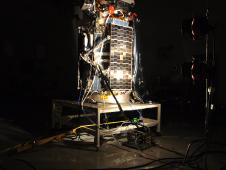 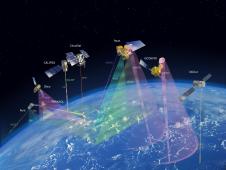 › View larger
As depicted here, by about 2014, the A-Train satellite formation should include OCO-2, GCOM-W1, Aqua, CloudSat, CALIPSO, Glory, and Aura. Credit: NASA Engineers and technicians at Vandenberg Air Force base, Calif., are preparing the Earth-observing satellite Glory for launch on Feb. 23. In orbit, the satellite's two science instruments will study key aspects of the climate that will help make it possible to produce more accurate global and regional climate models.

Last week, a team from Orbital Sciences Corporation stowed the Glory spacecraft in a protective nose cone called the payload fairing. The payload fairing, a two-pieced and bullet-shaped part, will shield Glory from the intense aerodynamic pressures and heating that Glory's launch vehicle will encounter during its ascent

After the successful completion of these encapsulation operations, Glory was transported to an outdoor processing tent near the launch pad. Following its arrival, engineers attached the satellite and payload fairing to the third stage of a Taurus XL, the four-stage, solid-fuel launch vehicle that will propel Glory into orbit.

At first glance, the Glory spacecraft might look unassuming. At 1.9 meters (6.2 feet) by 1.4 meters (4.6 feet), Glory is neither the largest nor the heaviest of NASA’s Earth-observing satellites. The whole of the Glory spacecraft – which is set to launch from Vandenberg on Feb. 23 at 2:09 a.m. Pacific Standard Time (PST) -- is not much taller than most people or wider than an oil barrel. It weighs about 528 kilograms (1,164 pounds), about half the weight of a vintage Volkswagen Beetle.

Despite its small size, Glory will deploy an innovative aerosol-sensing instrument called the Aerosol Polarimetry Sensor (APS) that many specialists predict will produce dramatic improvements in measuring airborne particles, as well as an important sensor that will help maintain a 32-year record of the sun's irradiance.

And, in Glory's case, the value of the mission exceeds that of its parts because the spacecraft will fly in formation with a group of other Earth-observing satellites known as the A-Train.

For most people, "A-Train" likely conjures up visions of jazz legend Billy Strayhorn or perhaps New York City subway trains rather than climate science, but the little-known convoy of satellites has emerged as a critical tool for climatologists

The four satellites of the A-Train, a group that currently includes Aura, Aqua, CloudSat, Cloud-Aerosol Lidar and Infrared Pathfinder Satellite Observation (CALIPSO), barrel across the equator at around 1:30 p.m. local time each afternoon, giving the constellation its name; the "A" stands for "afternoon." It might just as well stand for aerosols, as the A-Train satellites have proven especially important in the study of the tiny airborne particles, which can have an outsized impact on the climate.

"While we have made good progress in observing aerosol effects with current A-Train sensors, Glory should offer even deeper insights into how specific types of aerosols influence the atmosphere both directly and through their impacts on clouds and precipitation," said Tristan L'Ecuyer, a research scientist at Colorado State University and the coauthor of a recent Physics Today article about the A-Train. "There is still considerable ambiguity about the dominant types of aerosol in satellite observations and the amount of observed aerosol that can be attributed to human activities," he said.

Depending on their composition and other properties, aerosols can scatter or absorb the sun's heat, and can thus both warm and cool the planet depending on the circumstances. Complicating their climate impact even more, aerosols can also seed clouds and modify cloud properties. Overall, the particles remain a sort of terra incognita for climate scientists, particularly in comparison to greenhouse gases. "We need to do a much better job of characterizing aerosols in order to improve predictions of, for example, how much temperature will rise over the next 50 years," said research scientist Jonathan Jiang, of NASA's Jet Propulsion Laboratory in Pasadena, Calif. who was also a co-author of the Physics Today story.

Identifying which aerosols are natural and which are human-generated, or anthropogenic, is critical for enhancing climate model accuracy, Jiang explained. However, since there is no reliable way of distinguishing natural from anthropogenic aerosols with satellite instruments in all cases, global estimates of anthropogenic aerosol emissions remain uncertain.

Black carbon, for example, has both natural and human sources. The sooty particles, which can warm climate by strongly absorbing sunlight and repressing clouds, escape from both tailpipes of diesel engines and the flames of natural wildfires. Parsing out the relative human contribution to black carbon levels is particularly important as recent studies have suggested that the particles may play a key role in Arctic warming, as well as in the retreat of certain Himalayan glaciers.

Glory will help tease out the anthropogenic contribution by offering a more complete accounting of the aerosol types wafting about in a given portion of the atmosphere. When black carbon is found in close proximity to certain types of organic carbon aerosols, for example, wildfires are the likely source. In contrast, if nitrate aerosol or ozone is nearby then combustion engines are more likely.


To make such assessments, climatologists rely on a broad suite of instruments. The current A-Train contains 15 scientific instruments capable of observing the same approximate part of Earth's atmosphere and surface at a broad range of wavelengths. At the front of the train, Aqua carries instruments that produce measurements of temperature, water vapor, clouds, aerosols (in a relatively rudimentary sense), and rainfall. Next in line, CloudSat, a cooperative effort between NASA and the Canadian Space Agency (CSA), and CALIPSO, a joint effort of the French space agency Centre National d’Etudes Spatiales (CNES) and NASA, have high-tech radar and laser instruments that offer vertical profiles of clouds and aerosols. And the caboose, Aura, has a suite of instruments that produce high-resolution vertical maps of greenhouse gases, among many other atmospheric constituents.

After launch, a mission operations team at the Orbital Sciences Mission Control Center in Dulles, Virginia will ease Glory into the A-Train behind CALIPSO, a space formerly occupied by the French spacecraft PARASOL.

To do this, they will make about 20 burns using hydrazine propulsion thrusters, which, in Glory’s case, are slightly larger than usual because they were originally designed for the Vegetation Canopy Lidar (VCL) mission. The VCL mission was cancelled prior to launch, and the spacecraft was later resurrected for use as Glory.

Neighboring instruments from A-Train satellites will play a critical role in enhancing Glory's aerosol measurements. One of the most exciting areas of synergy, noted Glory Project Scientist Michael Mishchenko, of NASA's Goddard Institute for Space Studies, New York, involves the combination of Glory measurements with those from CALIPSO and CloudSat.

These two satellites can measure the vertical distribution of clouds and aerosols quite well, Mishchenko explained, while Glory's strength lies in characterizing properties of aerosol and cloud particles. "The combination of the microphysics from Glory and the vertical information from CALIPSO will give us a much better view than either instrument could offer alone," said Mishchenko.

Likewise, the Glory team should be able to expand the narrow swath of the Glory APS significantly by combining its data with aerosol measurements from the MODIS (Moderate Resolution Imaging Spectroradiometer) instrument aboard Aqua. MODIS can view a much wider swath than Glory, but has far less ability to discriminate between aerosol types. "We should be able to widen the APS swath from about 6 kilometers to something more like 100 kilometers with the help of MODIS," Mishchenko said, noting that should be enough to meet many needs of climate modelers.

"There's no doubt: Glory is going to play a huge role in the A-Train," he said.

Touring the Atmosphere Aboard the A-Train