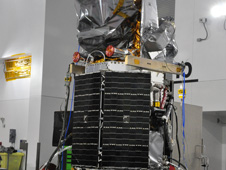 › View larger
Glory’s Aerosol Polarimetery Sensor (APS), under a protective bag here, is the triangular-shaped part of the spacecraft highest from the ground in this photograph. Credit: NASA/KSC 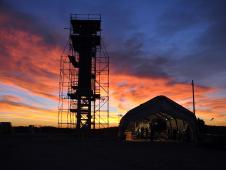 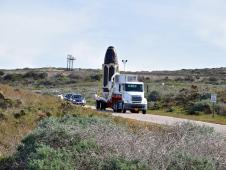 › View larger
Engineers used a truck to transport the payload fairing, with Glory encapsulated inside, to a temporary tent near the launch pad in early February. Credit: NASA/KSC Climatologists have known for decades that airborne particles called aerosols can have a powerful impact on the climate. However, pinpointing the magnitude of the effect has proven challenging because of difficulties associated with measuring the particles on a global scale.

Soon a new NASA satellite -- Glory -- should help scientists collect the data needed to provide firmer answers about the important particles. In California, engineers and technicians at Vandenberg Air Force Base are currently prepping Glory for a Feb. 23 launch.

Aerosols, or the gases that lead to their formation, can come from vehicle tailpipes and desert winds, from sea spray and fires, volcanic eruptions and factories. Even lush forests, soils, or communities of plankton in the ocean can be sources of certain types of aerosols.

The ubiquitous particles drift in Earth's atmosphere, from the stratosphere to the surface, and range in size from a few nanometers, less than the width of the smallest viruses, to several tens of micrometers, about the diameter of human hair.

The particles can directly influence climate by reflecting or absorbing the sun's radiation. In broad terms, this means bright-colored or translucent aerosols, such as sulfates and sea salt aerosols, tend to reflect radiation back towards space and cause cooling. In contrast, darker aerosols, such as black carbon and other types of carbonaceous particles, can absorb significant amounts of light and contribute to atmospheric warming.

Research to date suggests that the cooling from sulfates and other reflective aerosols overwhelms the warming effect of black carbon and other absorbing aerosols. Indeed, the best climate models available show that aerosol particles have had a cooling effect that has counteracted about half of the warming caused by the build-up of greenhouse gases since the 1880s.

"However, the models are far from perfect," said Glory Project Scientist Michael Mishchenko, a senior scientist at the Goddard Institute for Space Studies (GISS). "The range of uncertainty associated with the climate impact of aerosols is three or four times that of greenhouse gases," he said.

In comparison to greenhouse gases, aerosols are short-lived, and dynamic -- making the particles much harder to measure than long-lived and stable carbon dioxide. Aerosols usually remain suspended in the atmosphere for just a handful of days. Complicating matters, the particles can clump together to form hybrids that are difficult to distinguish.

In addition to scattering and absorbing light, aerosols can also modify clouds. They serve as the seeds of clouds, and can also affect cloud brightness and reflectivity, how long clouds last, and how much they precipitate. Reflective aerosols, like sulfates, for example, tend to brighten clouds and make them last longer, whereas black carbon from soot generally has the opposite effect.

Still, much remains unknown about aerosols and clouds. How do aerosols other than sulfates and black carbon affect clouds? How do aerosol impacts differ in warm and cold environments? Can infusions of aerosols near clouds spark self-reinforcing feedback cycles capable of affecting the climate?

The climate impact of clouds remains one of the largest uncertainties in climate science because of such unanswered questions. Some models suggest a mere 5 percent increase in cloud reflectivity could compensate for the entire increase in greenhouse gases from the modern industrial era, while others produce quite different outcomes.

Such unresolved issues prompted the Intergovernmental Panel on Climate Change (IPCC) to list the level of scientific understanding about aerosols as "low" in its last major report. Of the 25 climate models included by the IPCC in the Fourth Assessment Report, only a handful considered the scattering or absorbing effects of aerosol types other than sulfates.

"And less than a third of the models included aerosol impacts on clouds, even in a limited way, and those that did only considered sulfates," said Mian Chin, a physical scientist at NASA's Goddard Space Flight Center who specializes in modeling aerosols.

Glory, which contains an innovative aerosol-sensing instrument called the Aerosol Polarimetry Sensor (APS), aims to change this. By more accurately identifying a broad suite of aerosol types -- such as salt, mineral dust and smoke -- the instrument should help climatologists fill in key gaps in climate models.

Raw sunlight, explained Mishchenko, is unpolarized. This means the waves oscillate in an unpredictable, random fashion as they move through space -- much like a rope would wiggle about if it had two people flapping its ends up and down in no particular pattern.

When light waves pass through certain types of filters called polarizers the waves are forced into a more ordered form. Imagine that wobbling rope trying to pass throw a narrow slit in a fence: only the waves vibrating at a certain angle could make it through. The result is polarized light, or light for which the waves only oscillate at specific angles. The surface of glass, sunglasses, even clouds of aerosol particles can polarize light.

Yet, ground and aircraft-based studies, particularly those conducted with an aircraft instrument called the Research Scanning Polarimeter, which is quite similar to APS, show that polarized light contains the most information about aerosol features. "Earlier instruments can approximate the abundance of aerosol in general terms, but they leave much to be desired if you're trying to sort out the shape and composition of the particles," said APS Instrument Scientist Brian Cairns, also of GISS.

These scanning electron microscope images, which are not at the same scale, show the wide variety of aerosols shapes. From left to right: volcanic ash, pollen, sea salt, and soot. Credit: USGS, UMBC, Arizona State University

Large, spherical particles -- sea salt, for example -- leave a very different imprint on light in comparison to smaller and more irregularly-shaped particles such as black carbon. As a result, much like forensic scientists might study the details of blood droplets at a crime scene to reconstruct what happened, climatologists using Glory data will look to the polarization state of scattered light to work backwards and deduce the type of aerosol that must have scattered it.

Glory will not be the first Earth-observing satellite instrument to study polarization. French instruments that launched in 1996 and 2002 have as well, but the APS promises to be far more accurate and will look at the same particles from many more angles.

Nonetheless, interpreting Glory's APS data will be an extremely complex task. The mission will provide such a vast amount of new polarization data about aerosols that, in order to make sense of it, scientists will first have to validate APS science products with ground-based sensors scattered around the globe. Likewise, they will have to adapt and update mathematical techniques developed for an aircraft instrument to ensure they work well in a space environment.

All of this will take some time to refine and perfect. Mishchenko's team expects to release preliminary results as soon as possible after Glory launches, but he also expects to release improved and enhanced versions of Glory's APS data products over time.

A great deal of work lies ahead of Glory's science team and the aerosol science community more broadly, but the mission has the potential to produce profound advancements in understanding the perplexing particles. "Glory has the potential to offer a critical view of aerosols that we have never had from space before," said Glory's Deputy Project Scientist Ellsworth Welton.