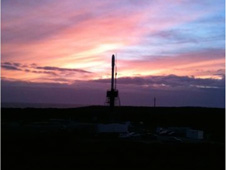 › View larger
The sun sets over Vandenberg Air Force Base behind the Taurus XL launch vehicle that will propel Glory into space. Credit: NASA/KSC 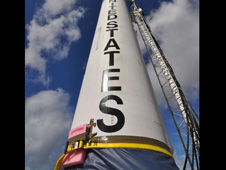 › View larger
Glory, which will launch on Feb. 23, has a launch window of just 48 seconds. Credit: NASA/KSC 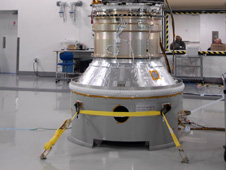 › View larger
Glory sits in a clean room at Vandenberg prior to being stowed in a Taurus XL launch vehicle. Credit: NASA/KSC NASA's next Earth-observing satellite mission, called Glory, is scheduled to launch from Vandenberg Air Force Base in California early on the morning of Feb. 23. Glory's observations of aerosols in Earth's atmosphere and the sun's irradiance will improve our understanding of climate.

What does Glory measure?
Glory has two distinct science instruments. One is focused on the sun and the other on Earth's atmosphere. Glory's Total Irradiance Monitor (TIM) measures variations in the sun's Total Solar Irradiance (TSI), the amount of solar energy that strikes the top of the atmosphere. Meanwhile, Glory's Aerosol Polarimetry Sensor (APS) observes small droplets and particles in the atmosphere that can affect the climate called aerosols.

Why Glory?
An accurate description of Earth's energy budget—the amount of energy entering and exiting the Earth's climate system—is important for anticipating future changes to the climate. Shifts in the global climate and associated weather patterns impact human life by altering landscapes and changing the availability of natural resources. NASA is working to improve the understanding of exactly how and why this energy budget changes. The Glory mission, managed by NASA's Goddard Space Flight Center, Greenbelt, Md., contributes to this critical endeavor.

Does the amount of radiation emitted by the sun change over time?
Yes, during periods of high solar activity, increases in the number of sunspots (cool dark blotches on the sun's surface) and faculae (hot bright spots adjacent to sunspots) cause the sun's TSI to increase slightly. Overall, TSI varies by approximately 0.1 percent between the most and least active parts of 11-year solar cycles.

Are there solar cycles longer than the 11-year cycle that could affect Earth's climate?
Yes, it's possible—probable, in fact—that the sun experiences sizable shifts in irradiance over much longer time scales that could impact climate. For example, a 70-year period, from 1645 to 1715, called the Maunder Minimum, which featured exceptionally low numbers of sunspots, is thought to be connected to a period of especially low TSI that helped drive Europe's "Little Ice Age."

Is the sun the cause of the global warming observed during the last century?
No. Scientists who study the links between solar activity and climate believe that the small variations in the sun's irradiance cannot explain the intensity and speed of warming trends seen on Earth during the last century. The 0.1 percent shift in solar irradiance simply isn't enough to have a strong influence, and there's no convincing evidence that suggests TSI has trended upward enough over the last century to affect climate significantly.

What are aerosols?
Aerosols are tiny liquid and solid particles suspended in the atmosphere. These particles play a critical role in the climate system and are present nearly everywhere from the upper reaches of the atmosphere to the surface air that humans breathe. They range in size from a few nanometers, less than the size of the smallest viruses, to several tens of micrometers, the diameter of human hair.

Where do natural aerosols come from?
Volcanoes can inject huge columns of gases high into the atmosphere that can become sulfate particles. Sandstorms whip small pieces of mineral dust into the air. Forest fires send partially burned black carbon and other smoke particles aloft. The spray from surface waves injects sea salt into marine air. Even certain plants produce gases that react with other substances in the atmosphere to produce aerosols.

An artist's animation of Glory in orbit. Photo credit: NASA/GSFC


How do aerosols affect the climate?
Aerosols can affect climate directly by scattering and absorbing incoming sunlight—or radiation reflected by the surface of Earth—as it passes through the atmosphere. The bulk of aerosols, particularly sulfates, scatter incoming sunlight, some of it back toward space, thus cooling Earth's surface immediately below. Other aerosols, especially black carbon, can absorb some of the incoming radiation and warm the atmosphere. Aerosols can also have indirect effects on the climate by changing how clouds behave. In fact, certain aerosols provide tiny "seeds" that allow water vapor in the atmosphere to coalesce more easily than it would otherwise. In a sense, clouds owe their very existence to aerosols. However, accurate quantitative knowledge of aerosol effects on climate, and especially the role of human-made aerosols, remains elusive.

What makes Glory's APS instrument unique?
The Glory APS is NASA's first instrument capable of studying the polarization of light from aerosols with enough precision to identify aerosol types globally from space. Analyzing the polarization—a measure of the physical orientation of light waves as they move through space—of light scattered by aerosols helps scientists distinguish between different types of aerosol particles.

What makes Glory's TIM instrument unique?
The TIM is an improvement of a similar instrument launched in 2003 as part of NASA's Solar Radiation and Climate Experiment (SORCE) mission. It will help maintain a largely continuous record of solar irradiance that stretches back to the 1970s. The Glory TIM should be at least three times more accurate than the previous version. The Glory TIM has been calibrated at a new ground-based facility called the TSI Radiometer Facility (TRF).


How big is the Glory spacecraft?
The Glory spacecraft is average in comparison to other NASA Earth-observing satellites. It isn't the largest or the heaviest, nor does it carry the most scientific instruments. At 1.9 meters (6.2 feet) by 1.4 meters (4.6 feet), Glory isn't much taller than most people or wider than an oil barrel. Glory weighed 528 kilograms (1,164 pounds) at launch, about half the weight of a Volkswagen Beetle.

How will Glory achieve orbit?
A four-stage, solid-fuel rocket—a Taurus XL—is scheduled to launch Glory into orbit from Vandenberg Air Force Base. The spacecraft will fly among a series of Earth-observing satellites, dubbed the A-Train, that track the same line over Earth. The A-Train is comprised of a group of U.S. and international satellite missions that operate in the same orbit for the purposes of making coordinated measurements.