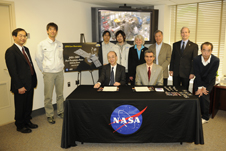 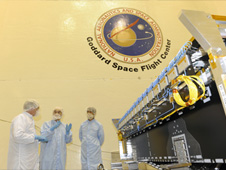 The DPR is one of two instruments that will fly aboard NASA's Core Observatory for the Global Precipitation Measurement (GPM) mission scheduled for launch from Tanegashima Space Center, Japan on February 2014.

The Japanese engineering team that built the DPR accompanied the instrument to Goddard. They spent ten days putting the instrument through a post-travel check-up. The tests went well and according to schedule, said Masahiro Kojima, DPR Project Manager at JAXA.

The GPM mission was initiated by NASA and JAXA and is designed to unify precipitation measurements made by the GPM Core satellite along with a constellation of international partner satellites to achieve global coverage of rain and snow every three hours.

NASA provided GPM's other instrument, the GPM Microwave Imager (GMI), which was delivered to Goddard in late February and has been integrated onto the GPM Core Observatory.

"We are at a very exciting phase of the project; having both instruments GMI and DPR delivered to Goddard," said GPM Project Manager, Art Azarbarzin.

The DPR will be integrated onto the GPM spacecraft in the coming months.

The radar instrument will provide insights into a storm's physical structures. Its data will expand our knowledge of precipitation science, the Earth's water cycle, and the supply of fresh water around the world. It also will aid forecasts of hurricanes, floods and other natural disasters.

The instrument is the first space-borne radar to use two bands in the microwave range of frequencies, Ku and Ka, to study precipitation. It obtains three-dimensional information about precipitation particles by measuring reflected energy from them at different heights within the clouds. The 'dual' in the radar's name refers to the way the two microwave bands of the instrument complement each other, allowing the radar to provide new information about the size distribution of raindrops and snowflakes as they fall.

For more information about the GPM mission, please visit: