Thank you to everyone who submitted photos to the first installment of our GPM Extreme Weather Photo Competition. We loved all of your entries and thoroughly appreciate your participation!

The GPM Photo Competition Committee is happy to announce our top 5 picks. We’ll be sending the submitters NASA bags and GPM stickers. Please stay tuned for additional contests and activities. 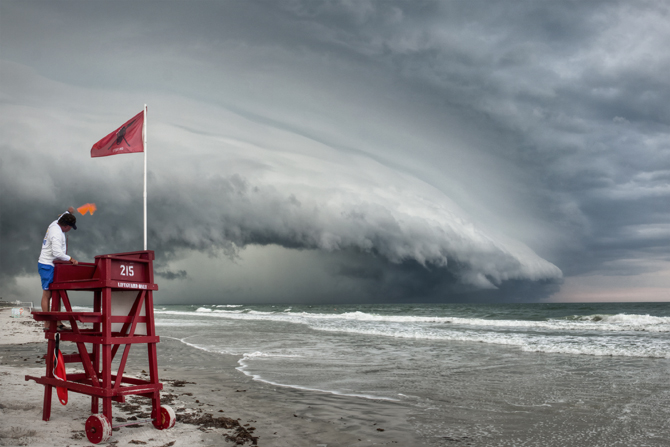 How this Photo Was Taken:
“I'm a photography student at the University of Central Florida. I began chasing storms a little over three years ago. This day started out like many other days. I was out on a storm west of the coast, photographing it even as the National Weather Service issued a severe warning. The NWS lifted the warning, but I decided to stick with it as it moved to the coast. Just as it started to move offshore to the east, it made a turn to the south.

I have shot many storms from the same spot this photo was taken, and I almost drove by to get a different vantage point, but something told me to just stop at my spot. I jumped out of my car and ran down to the beach. To my surprise, there were still several beach-goers taking in the sight of this massive shelf cloud, as well as a few surfers in the water, trying to catch one last wave. Of course, there was a Volusia County lifeguard standing there watching over everyone. I walked down to the water and took some shots, always keeping an eye on the lifeguard. As the shelf cloud approached, I swung back behind the guard tower, waited for him to climb up it and signal to the surfers to exit the water. I took several shots, then hopped back in my car and tried to stay south of the storm.

The storm actually pushed back on shore as it moved south, and then became strong enough for tornado warnings on three separate occasions. I saw a large wall cloud, another spectacular shelf cloud, and some very tight rotation in the couple hours I stuck with the storm after I left the beach in Ormond. Had I known what I already shot there, I probably wouldn't have even bothered. Definitely my signature shot of the year. “

Fun Fact:
A shelf cloud is a type of arcus cloud with a wedge shape. It is a low level, horizontal cloud formation usually associated with the leading edge of thunderstorms. The leading (outer) part of the shelf cloud appears smooth due to rising cloud motions, while the underside often appears jagged and wind-torn. 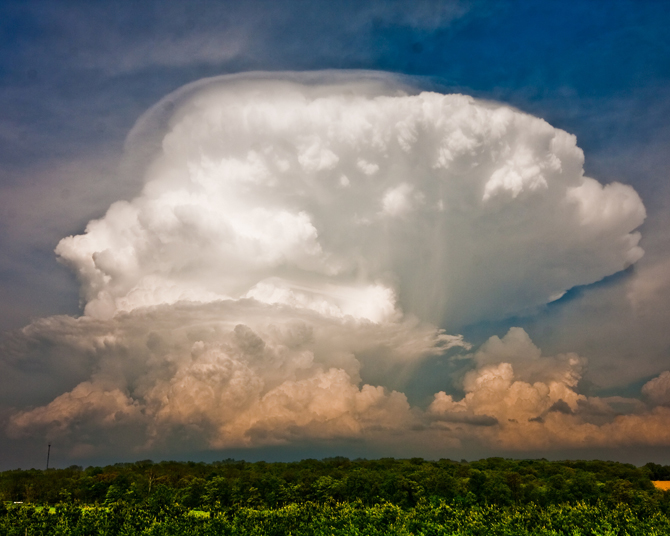 How this Photo was Taken:
“I was out on a farm with a photography club for the purpose of photographing farm life -- animals, barns, etc. I saw this impressive thunderstorm building several miles to the east of where we were and ended up focusing on that while the others in the group continued to follow the goats and horses around. This is one of many examples of how a completely unplanned photo wound up being among my best photos.

The storm cell dropped 1-3/4 inch hail near Sun Prairie. Fall streaks barely visible under the right side of the anvil may in fact be the falling hail.”

About Photographer Grant W. Petty:
Grant W. Petty is a Professor of Atmospheric Science at the University of Wisconsin - Madison

Wall of Dust, by Meggan Wood 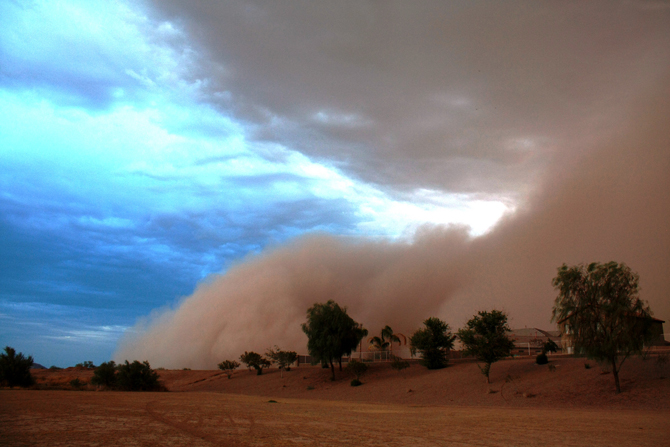 How this Photo was Taken:
“This photo was taken in a wash that runs through my neighborhood in Maricopa, AZ. The wash runs north/south through the neighborhood and the haboob (type of intense dust storm) was rolling in from the east.

It was taken on 7/5/11 in the afternoon, not long before sunset.

I saw the wall of dust coming and quickly drove to the wash to get a good wide-open view of the height of the dust looming over the houses. I barely had time to get back to my car before it hit and I was engulfed! The darkness was surprising but it only lasted about 10-15 minutes before it thinned out enough to where I could drive back home, only about 2 minutes away. This was the giant haboob that made national news when it rolled through and entirely covered all of Phoenix and some surrounding cities (more information: http://www.nytimes.com/2011/07/07/us/07dust.html). Maricopa is about a half-hour drive south of the Phoenix Sky Harbor airport."

About Photographer Meggan Wood:
“I moved to Phoenix in 2001 when I was 21 years old and had grown up in Memphis, TN. The extreme difference of landscape plus the unique weather/storms and the lovely sunrises/sunsets they can produce drove me to start capturing what I could. My husband bought me camera after camera (point-and-shoots) until we finally upgraded me into a Canon Rebel xSi DSLR. Landscape/weather/nature photography has become a really fun hobby/passion for me over the last handful of years. I hope to one day get a coffee table book published so I can share all of the beauty I have captured.” 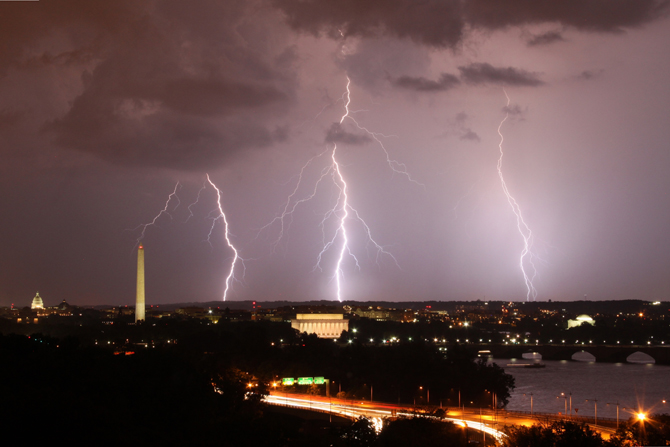 How this Photo was Taken:
“This photo was taken on September 1, 2012 in Rosslyn, Arlington, VA, US, using a Canon EOS REBEL T1i camera.

Unfortunately, not a terribly cool story -- I just happen to have an apartment with an amazing view of the city. The storm that blew through started off with an incredible amount of lightning and then dumped a significant amount of rain in a short amount of time -- on the other side of the river. DC got drenched and Arlington didn't see a drop.”

About Photographer Brian Allen:
Brian Allen is a journalist with the Voice of America and an amateur photographer.

See an animated satellite image from this day, and learn more about this storm

How this Photo was Taken:
“As a large squall line moved through the area.  The National Weather Service had warned about a large scale Derecho forming and moving through.  This spawned a couple brief severe thunderstorms that dumped hail on rush hour traffic before the main line moved in.  As the bigger storm moved into the Wichita area, reports were coming in of 70 mph winds and hail.  There is an open farm field roughly two miles from my house that I shot lightning on the previous night.  I sat there for about 20 minutes before this large squall line pushed through the clouds.  I was hit with a pretty good gust front as it got closer, but as the winds increased, I decided to get to shelter.  This photo was one of the last ones I took.  This story and others are available at www.ruminationofthunder.com and this specific story is at http://www.ruminationofthunder.com/2012_05_01_archive.html. “

About Photographer Brian Johnson:
“I am a local storm chaser for a group of radio stations and love doing storm photography.

I have been enjoying severe weather since being caught in a tornado at seven years old.  My father still regrets saying the words “Look at that”.  Remember, if you take a frightened child out into a storm to show them how beautiful nature’s fury can be, they may turn out like me.  I also am a published writer and you can follow those exploits at http://fatherthunder.blogspot.com/.”