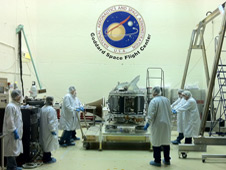 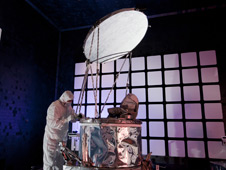 Engineers at NASA Goddard will integrate both the GMI and the Dual-frequency Precipitation Radar (DPR) onto the main body of the Global Precipitation Measurement (GPM) mission's core satellite. After extensive testing, the satellite will then be shipped to Japan for launch in 2014.

The GPM mission is a joint effort between NASA, the Japan Aerospace Exploration Agency (JAXA) and other international partners. The GPM mission will improve climate, weather and hydrological predictions by providing more accurate precipitation measurements from space.

The GMI instrument will play an essential role in the worldwide measurement of precipitation and environmental forecasting when GPM launches. The GMI will be extremely beneficial to forecasters during extreme weather events. GMI data will allow scientists to both track tropical cyclones and forecast their progression or detect falling snow from space.

"Together with the radar flying on the Core satellite, the GMI will provide a unique database to characterize precipitating particles in different parts of the world, something that is currently not possible. This database is key to obtaining unified and accurate precipitation data from the entire GPM constellation of radiometers," said Arthur Hou, GPM Project Scientist at NASA Goddard.

Ball Aerospace’s role in the GPM program included the design, development and fabrication of the GMI. Roughly eight feet tall, the conical-scan microwave instrument is a powerhouse of radiometry. GMI rotates at 32 revolutions per minute, using two very stable calibration points on each revolution to calibrate the data it has scanned. The GMI allows for temporal sampling of rainfall accumulations as well as more frequent and higher quality data collection. GMI's design is based on successful microwave sensors built previously by Ball Aerospace. Following launch, Ball Aerospace will provide post-delivery support at NASA Goddard and launch site as well as post launch support.

The GPM mission builds on the continued success of the Tropical Rainfall Measuring Mission (TRMM) satellite by expanding current coverage of precipitation from the tropics to the entire world. GPM's measurements will provide insight into the atmospheric processes that generate and control precipitation. GPM will provide forecasters with next-generation observations of rain and snow worldwide every three hours, and detailed 3-D views of precipitation structure in the atmosphere.

Through improved measurements of rain and snow, precipitation data can reveal new information on hurricane eyewalls and intensity, measure hazard-triggering rainfall events, provide inputs into climate and land surface computer models, and offer new insights into agricultural productivity and world health. GPM data will also advance our understanding of the water and energy cycles, both of which are critical in understanding climate.