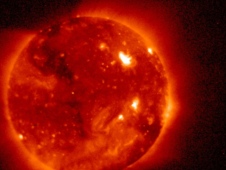 Scientists and engineers from NASA and the National Oceanic and Atmospheric Administration (NOAA) have been working to bring the Solar X-Ray Imager (SXI) instrument to full functionality since the Geostationary Operational Environmental Satellite (GOES)-15, formerly known as the GOES-P satellite achieved orbit.

"Since the early checkout of GOES 15 (P) and the anomalous turn on of the Solar X-Ray Imager, the team has been aggressively pursuing all avenues to recover the instrument," said Andre' Dress, GOES N-P Deputy Project Manager at NASA's Goddard Space Flight Center in Greenbelt, Md." Frankly, we were down to our last straw when all the teams' hard work and efforts finally paid off. We now believe we have a full recovery of the instrument's functionality! It's an incredible story and a true testament of our NASA/contractor teams expertise, hard work and determination."

On June 3, the GOES 15 Solar X-Ray Imager finally came on-line. Scientists and engineers had subjected SXI to a series of long duration turn on tests in the hopes of clearing the short. About 16 hours into the testing, the instrument voltages returned to normal values and SXI now appears to be functioning properly.

"We were facing a tough problem when we first attempted to bring SXI on line," said George Koerner, SXI program manager at the Lockheed Martin Space Systems Company (LMSSC) Advanced Technology Center (ATC) in Palo Alto, Calif. where the Solar X-ray Imager was designed and built. "But because of our ability to bring together subject matter experts from both government and industry, to move forward step by step, and to work as a team patiently and persistently, together we achieved mission success. This is an enormously satisfying outcome."

Since its recovery, several test solar images have also been subsequently taken successfully. The GOES team continue to assess the health of the instrument. This new round of testing will assess SXI's total functionality. That functionality means the team will capture images of the sun with the camera to assess whether the camera is properly processing image data.

"I don't think most people realize how important these space weather instruments are in our everyday life," Dress said. "This data is used by the U.S. Department of Defense, NOAA, NASA, and the Federal Aviation Administration (FAA) in protecting our space assets, land based assets and directing flight paths for the FAA."

GOES-15 will join three other NOAA operational GOES spacecraft that help the agency's forecasters track life-threatening weather and solar activity that can impact the satellite-based electronics and communications industry. NASA's testing of the spacecraft and its instruments will continue through the entire post launch test period expected to end in late August 2010. This will be followed by a series of NOAA Science Tests. The GOES series of U.S. satellites are developed by a joint NASA-NOAA-Industry partnership, launched by NASA (with industry partners), and operated by NOAA.

For more information about the GOES-P mission and program on the Web, visit:
www.nasa.gov/goes-p Goddard Release No. 10-53