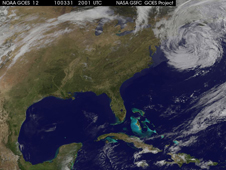 This image shows the storm on March 31, 2010, at 20:01 UTC (4:01 p.m. ET) moving off the New England coast. The video shows GOES observations from March 21 through 31. Credit: NASA/GOES Project
› View video (30 MB mp4) New England received a second week of flooding from March 21-31, 2010 when a parade of three large storms flooded the upper Midwest and Northeast in the second half of the month. The Geostationary Operational Environmental Satellite called GOES-12 captured a movie of those storms as they dumped heavy rainfall during the last 10 days of March.

"The normal three-day repeat pattern of spring storms was provided by the prevailing westerly winds," said Dennis Chesters of the NASA GOES Project at NASA's Goddard Space Flight Center in Greenbelt, Md. The rainfall in this week's New England storm was enhanced by moisture from the Gulf of Mexico and the Bahamas that traveled up the East Coast. The GOES-12 movie clearly shows the clouds and moisture streaming in from the Gulf and adding power to the storm, especially during March 28-30.

The GOES-12 operated by the National Oceanic and Atmospheric Administration (NOAA) captures images of U.S. East Coast weather. Those images from March 21-31, 2010 were compiled into a movie by the NASA GOES Project at NASA's Goddard Space Flight Center, Greenbelt, Md.

The movie was created by overlaying the clouds observed several times per hour by NOAA's GOES Imager onto a true-color map previously derived from NASA's Moderate Imaging Spectroradiometer (MODIS) land-mapping instrument. The infrared channels on GOES detect clouds day and night, which are portrayed as grey for low clouds and white for high clouds. The movie compresses 11 days into about two minutes. It illustrates how continental-scale land/sea/air phenomena come together to make large early springtime storms.

The first round of storms that ended March 19 left Boston with a monthly total of 7.45 inches; Bridgeport, Conn. at 4.02 inches; and Portland, Maine reported 3.57 inches of rain.

On March 30, the rainfall total in Boston, Mass. was 2.94inches and since March 1, the total rainfall was 14.83 inches. That indicates that since March 19, over seven inches of rain fell in the second round of storms. Record rainfall was also recorded at the Blue Hills Observatory in Milton, Mass., where the storm total rainfall through 2 p.m. EDT on March 30 was 5.22 inches. The March total rainfall for that location was18.39 inches and is far over the previous record for the month of 13.07 inches recorded in 2001. Meanwhile, farther north in Portland, Maine 2.73 inches of rain fell on March 30, bringing the rainfall total to 10.88 inches for the month of March.

The National Weather Service noted that March has been the wettest on record for Boston; Bridgeport, Conn.; New York City; and Islip, N.Y.

The National Weather Service extended flood warnings for rivers in Connecticut, New Hampshire, Massachusetts, and Rhode Island. During the week of March 29, the Pawtuxet River in Cranston, R.I. was experiencing major flooding.

GOES-12 continues to keep an eye on the eastern U.S. as New England begins clean up this weekend with a warm, dry forecast.