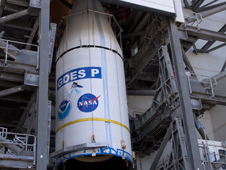 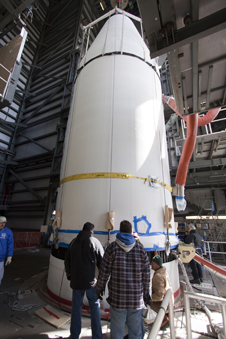 GOES-P is the third and final spacecraft to be launched in the GOES N Series of geostationary environmental weather satellites. The GOES satellites continuously provide observations of more than 50 percent of the Earth, including the continental United States, providing weather monitoring and forecast operations and a continuous and reliable stream of environmental information and severe weather warnings.

"The SXI is improving our forecasts and warnings for solar disturbances, protecting billions of dollars worth of commercial and government assets in space and on the ground, and lessening the brunt of power surges for the satellite-based electronics and communications industry," said Tom Bodgan, director of NOAA's Space Weather Prediction Center (SWPC) in Boulder, Colo.

GOES-P joins a system of weather satellites that provide timely environmental information to meteorologists and the public. The GOES system provides data used to graphically display the intensity, path and size of storms. Early warning of impending severe weather enhances the public's ability to take shelter and protect property.

GOES-P will be launched on board a United Launch Alliance Delta IV (4, 2) launch vehicle under a FAA commercial license. The satellite will be turned over to NASA after the successful checkout is completed by Boeing Space and Intelligence Systems, El Segundo Calif.

Once in orbit GOES-P will be designated GOES-15, checked out and then stored on-orbit and ready for activation should one of the operational GOES satellites degrade or exhaust their fuel.

NOAA manages the GOES program, establishes requirements, provides all funding and distributes environmental satellite data for the United States. NASA Goddard procures and manages the design, development and launch of the satellites for NOAA on a cost reimbursable basis. Boeing Space and Intelligence Systems built GOES-P.

For more information about the GOES-P mission and program on the Web, visit:


For information about NASA and agency programs on the Web, visit: