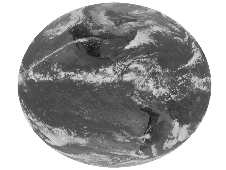 NOAA's newest Geostationary Operational Environmental Satellite – GOES-15 – took its first full-disk infrared image of the Earth on April 26 at 17:30 UTC (1:30 p.m. EDT). Clouds associated with the low pressure areas over the Ohio Valley and southern Minnesota and the cold front coming into the Pacific Northwest are visible on the image. Image Credit: NASA/NOAA/SSEC
› Larger image

Infrared (IR) imagery enables weather forecasters to gather information such as Earth, cloud and sea surface temperatures; derive winds and temperature and moisture profiles of the atmosphere; and detect fires and track the movement of the smoke plumes from them. Infrared radiation is electromagnetic radiation. Its wavelength is longer (and the frequency lower) than that of visible light, but the wavelength is shorter (and the frequency higher) than that of microwaves.

"This (image) marks the final stage of the critical events for the spacecraft and indicates that the visible and infrared spacecraft imaging instruments are performing as expected," said Andre' Dress, the NASA GOES Deputy Project Manager at NASA's Goddard Space Flight Center in Greenbelt, Md. "We're looking forward to more imagery as we finish up post-launch testing."

The first GOES-15 full-disk infrared image was from the Imager. The GOES Imager is a multi-channel instrument designed to sense radiant and solar-reflected energy from the Earth.The first full-disk infrared image of the Earth was taken on April 26 at 17:30 UTC (1:30 p.m. EDT). It showed clouds associated with low pressure areas over the Ohio Valley and southern Minnesota, and the cold front coming into the Pacific Northwest. The image also shows strong thunderstorms and associated clouds in South Florida, convection along the Inter-Tropical Convergence Zone near the equator, the clouds associate with the sub-tropical jet stream from the Pacific Ocean through south Texas and snow on the ground in the Rocky Mountains.

The Sounder is another instrument on GOES-15 which also took Infrared images of the Earth. The Sounder is designed to provide data from which atmospheric temperature and moisture profiles, surface and cloud-top temperatures, and ozone distribution can be deduced by mathematical analysis.

NASA testing of the spacecraft and its instruments will continue through the entire post launch test period expected to end in late August 2010. This will be followed by the NOAA Science Test. The GOES series of U.S. satellites are developed by a joint NASA-NOAA-Industry partnership, launched by NASA (with industry partners), and operated by NOAA.

In general, the GOES-15 infrared data has a much cleaner signal to noise ratio than the previous GOES-8 through -12 series. In addition, GOES-15 has much improved image navigation and registration. The GOES Imager is used for a host of applications, ranging from meteorological, climate, oceanographic and hazards. The Sounder is used to estimate temperature and moisture profiles in the atmosphere. It can also derive information on clouds and certain trace gases such as upper-level ozone.

The GOES-15 Imager was built by ITT Industries in Fort Wayne, Ind. The first public Imager infrared image showed the earth-ocean-atmosphere system in five spectral regions. These are: a visible band, a shortwave window band, a water vapor band, a longwave window band and a carbon dioxide sensitive band. The GOES-15 Sounder was also built by ITT and an infrared sector scan of the United States showed the earth-ocean-atmosphere in 18 infrared spectral regions. These allow one to 'profile' atmospheric temperature and moisture. The IR bands on the sounder range from the longwave (14.7 micrometers) to the shortwave (3.7 micrometers).

GOES-15, launched on March 4, 2010, from Cape Canaveral, Fla., joins three other NOAA operational GOES spacecraft that help the agency's forecasters track life-threatening weather and solar activity that can impact the satellite-based electronics and communications industry. After four more months of tests, GOES-15 will be placed in orbital storage mode, ready for activation if any of NOAA's operational GOES spacecraft experiences trouble.

GOES-15 is the third and final spacecraft to be launched in the GOES N-P Series of geostationary environmental weather satellites. With two operational satellites, they provide weather observations that cover over 50 percent of the Earth's surface.

NASA's GOES Project is located at NASA's Goddard Space Flight Center, Greenbelt, Md. On March 24 the NASA and NOAA team began post launch verification testing, which will last for approximately 150 days. Once all the systems are checked out, the satellite will be turned over to NOAA for operational control and will be stored in-orbit, ready for activation should one of the operational GOES satellites degrade or exhaust their fuel.

For more information about the NOAA Science Test, visit:
http://rammb.cira.colostate.edu/projects/goes-p/