The life of Hurricane Alex as he struggled across hurricane alley for two weeks in June 2010, as seen by the GOES-13 satellite. Credit: NASA GOES Project

The National Oceanic and Atmospheric Administration's (NOAA) GOES-13 satellite captures visible and infrared images of the weather over the U.S. East coast. These images are overlaid on a true-color background map, and fed into small and medium-sized videos of the Gulf of Mexico and the nearby Atlantic Ocean for the last 3 days. The GOES-11 satellite provides similar coverage of the U.S. west coast and Eastern Pacific. 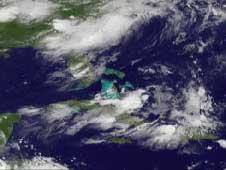 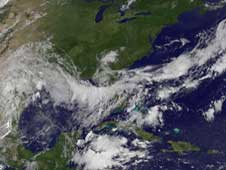 > View high resolution image
GOES-13 visible satellite imagery from July 2 at 1331 UTC (9:31 a.m. EDT) shows a lingering stationary front straddling Texas and the Gulf Coast. The front is apparent in the clouds that stretch from Texas (left) where Alex's remnants are located, east over the Gulf of Mexico in a wavy pattern that extends east of Florida (right) and into the Atlantic Ocean. Credit: NASA GOES Project The GOES satellites scan further into the oceans twice per hour, offering the opportunity to watch storm development in the swath called "Hurricane Alley," from Atlantic to Pacific. The bigger scans are used to make large-scale Hurricane Alley movies for the last three to five days, illustrating the life-cycle of subtropical storms, as some of them spin up to become hurricanes.

The GOES satellites also scan the entire disk of the Earth every three hours. These are used to produce "full disk movies" from the last five days of satellite imagery data from GOES-13 in the Atlantic and GOES-11 in the eastern Pacific. With just eight frames per day, time flies by quickly as weather circulates across the Western Hemisphere.

"We have recently changed the code for the up-to-date GOES movies, including the "Hurricane Alley" movies, that have links on the page goes.gsfc.nasa.gov," said Dr. Dennis Chesters of the NASA GOES Project at Goddard. "They are now all encoded with H264, the digital compression standard used by the cable TV industry."

Because of the modern video standard, these play on all personal computers (Windows and Macs) that are up-to-date.

Dr. Chesters said that the NASA GOES Project also slightly resized the GOES movies, so that all of the movies have at least one dimension that is a sub-multiple of a standard HDTV dimension (720/1080). "This makes it easy for software that automatically fits movies to a screen to resize them without complicated interpolation," Dennis said. "So, the movies appear sharp and have snappy playback on small-screen devices. For instance, they work nicely on the popular iPads."

As a hidden bonus, each of the four frames at the top of the page (WEST+EAST for USA+GLOBE) is linked to a "reference movie" that downloads a movie that is the right size for your device. This is a Quicktime-only feature that will work on all Apple computers and Windows PCs that have Quicktime installed. The "reference movie" will accommodate iPhones and iPads as well as Macs and PCs. It sends a highly compressed version if the device is using a slow G3 phone link, but sends a larger, less compressed version to bigger screens with faster connections.

For the 2010 hurricane season, the NASA GOES Project is considering creating a gallery of up-to-date movies in many sizes/formats, with a separate web page with explanations and links.