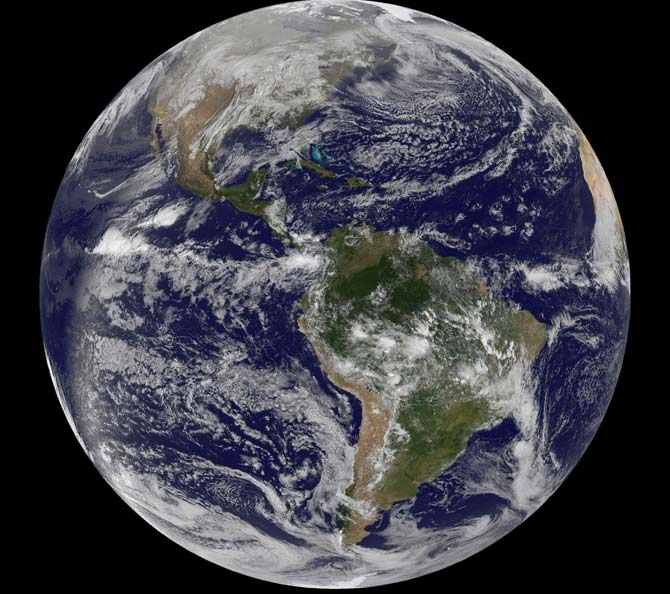 The GOES-13 satellite captured a "full-disk image" of North and South America in an image created December 30 at 1445 UTC (9:45 a.m. EST), as the world awaits the new year. Credit: NOAA/NASA GOES Project

The GOES series of satellites keep an eye on the weather happening over the continental U.S. and eastern Pacific and Atlantic Oceans and had a busy time with wild weather in 2010. Today, GOES-13 captured one of the last images of North and South America in 2010 as the world continues to turn toward 2011.

NASA's GOES Project, located at NASA's Goddard Space Flight Center in Greenbelt, Md., procures and manages the development and launch of the GOES series of satellites for NOAA on a cost-reimbursable basis. NASA's GOES Project also creates some of the GOES satellite images and GOES satellite imagery animations. NOAA manages the operational environmental satellite program and establishes requirements, provides all funding and distributes environmental satellite data for the United States.

In 2010, GOES satellites were busy providing images and animations of weather systems from nor'easters to tropical cyclones that caused blizzards, flooding and wind damage.

Most recently, the GOES project used satellite data to create an impressive animation of the great Christmas weekend blizzard that pummeled the northeastern U.S. Prior to that, GOES imagery showed travel conditions for the holiday weekend when that low was over the Colorado Rockies.

On Dec. 19, the GOES-11 satellite captured an image of the famous "Pineapple Express." Occasionally in the winter, a large jet stream forms across the mid-Pacific, carrying a continuous flow of moisture from the vicinity of Hawaii to California, bringing heavy rain and snow to the Sierra-Nevada for several days.

During the summer, on July 25, GOES-13 imagery tracked one of the most destructive storms in years to strike Washington, D.C. and the surrounding area. Strong winds downed trees and power lines, leaving hundreds of thousands of residents without power, stopping elevators, and darkening malls and movie theaters. Falling trees killed at least two people. The NASA GOES Project created a satellite animation of the storm as moved through the region.

GOES-13 was busy in the Atlantic during the 2010 hurricane season. The Atlantic season started on June 1 and ended on November 30. The Atlantic season tied for third with two other years (1995 and 1887) as having the largest number of named storms at 19, and tied with two other seasons (1969 and 1887) for the second largest number of hurricanes, with 12. GOES-13 covered all of those tropical cyclones. GOES-11 didn't see the action in the Eastern Pacific tropics that GOES-13 did, however. Because of a La Niña event, the 2010 Pacific hurricane season (which began May 15 and ended Nov. 30) was the least active season in terms of the number of named storms and hurricanes on record. All tropical cyclones can be seen at NASA's Hurricane page archives for 2010 at: http://www.nasa.gov/mission_pages/hurricanes/archives/index.html.

On April 14, months before hurricane season started, GOES-13 became the official GOES-EAST satellite. GOES-13 was moved from on-orbit storage and into active duty. It is perched 22,300 miles above the equator to spot potentially life-threatening weather, including tropical storm activity in the Atlantic Ocean and Gulf of Mexico..

Before GOES-13 moved into the position previously occupied by GOES-12, GOES-12 captured a parade of three large storms the flooded the upper Midwest and Northeast in the second half of March. In the first half of March, GOES-12 covered storms as they dumped heavy rainfall in the Northeastern U.S.

On March 12, GOES-12 captured a very rare event in the tropics: the second–ever known tropical cyclone called Tropical Storm 90Q formed in the South Atlantic Ocean off the coast of Argentina.

During the first two weeks of February 2010, the GOES-12 weather satellite also observed a record-setting series of "Nor'easter" snow storms which blanketed the mid-Atlantic coast in two blizzards.

Whatever and wherever the weather in 2011, the GOES series of satellites will always go.