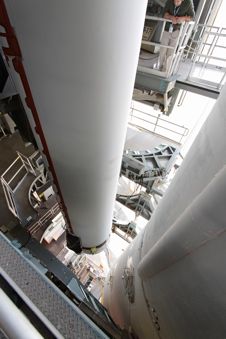 In the mobile service tower at Launch Complex 37 on Cape Canaveral Air Force Station in Fla., a solid rocket booster for the Delta IV rocket, slated to launch NASA's GOES-P satellite as it is lowered toward the base of the rocket. Credit: NASA/Jack Pfaller
› Larger view The GOES spacecraft continues its processing at the Astrotech Facility in Titusville, Fla. and fuel was loaded into the GOES-P spacecraft on Saturday, January 30. The fuel will keep GOES-P in orbit for about 14 years.

Just as you wouldn't want your car's gas tank to leak, engineers don't want a satellite to leak fuel. So, a team of engineers performed propulsion system pressurization and leak checks before fueling GOES-P. Those preparations were completed on January 22.

After carefully lifting and moving the fueled spacecraft, the team successfully mounted GOES P on top of the Delta IV Payload Attach Fitting (PAF). This was completed on February 1. The PAF is a conical shape structure that the spacecraft mounts onto inside the launch vehicle. The spacecraft rides on the PAF until it separates at approximately 22 thousand miles above the Earth's surface.

The launch vehicle continues processing on stand and the United Launch Alliance (ULA) is working off the technical issues that remain. The team is working towards a March 1 launch date.

GOES-P is the latest Geostationary Operational Environmental Satellite developed by NASA for the National Oceanic and Atmospheric Administration, or NOAA. The Delta IV rocket will be launched by United Launch Alliance for Boeing Launch Services under an FAA commercial license. Launch is targeted for no earlier than March 1.