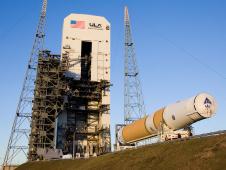 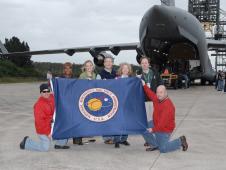 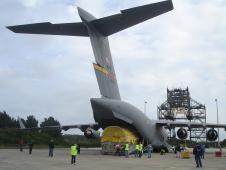 The GOES-P spacecraft being removed from the aircraft that transported it to NASA's Kennedy Space Center. Credit: NASA KSC
› Larger Image During the first three weeks in January, the latest in the series of Geostationary Operational Environmental Satellites also known as GOES-P is being processed and prepped for launch. Meanwhile, the first and second stages of the Delta IV rocket that will carry it into orbit, are being assembled on the launch pad.

The GOES-P spacecraft is currently being processed at Astrotech Space Operations in Titusville, Florida. Prior to the holiday break the Payload Attached Fitting (PAF) fit check was successfully completed on December 18, 2009. Functional testing on the spacecraft bus (the satellite) was successfully completed on December 22, 2009.

Over the last couple of weeks, the GOES-P spacecraft team commenced with instrument testing and cleaning on the Solar X-Ray Imager and the Imager and Sounder. Testing has completed on schedule and performance is as expected.

The first and second stage of the Delta IV rocket were mated in the United Launch Alliance (ULA) Horizontal Integrating Facility on Jan.6. Following the vehicle mate the rocket was transported to the launch pad (Pad 37B) at the Cape Canaveral Air Force Station on January 13th. The vehicle was successfully erected and stands ready for further processing and testing. The smaller solid rocket boosters are expected to be transported to the pad and integrated on January 14-15.

Andre' Dress, GOES N-P Deputy Project Manager at NASA's Goddard Space Flight Center in Greenbelt, Md. said, "Our team has made incredible strides in the past few weeks. Just coming off the successful launch and check out of GOES O, everyone is ready to go again and we are anxious to see GOES P added to the NOAA constellation."

Launch is targeted for no earlier than March 1.

For information on GOES-P, visit: