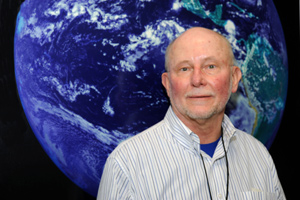 Dr. Dennis Chesters has been the GOES project scientist since 1994. He is responsible for assuring the scientific integrity of the remote sensing observations by the instruments monitoring the Sun, Earth, and space environment. He evaluates the required and expected data quality during pre-launch design and testing, and post-launch performance. His job has been described as the “conscience” of the project, reminding everyone to meet the performance requirements of NOAA and the public.

Chesters has 30 years of experience with four generations of GOES satellites. He performed the first infrared soundings of temperature and moisture from geosynchronous altitude, demonstrating that multi-channel observations of potential convective instability could improve real time prediction of severe storms.

In 1994, he installed and still maintains an automated GOES receiving ground system that puts real time images on the internet at http://goes.gsfc.nasa.gov. Calibrated and navigated full-resolution sectors are downloadable for scientific use during field campaigns. Enhanced GOES cloud images and movies on a true-color MODIS background can be downloaded constantly by the public. The site is very popular, serving 30 GBytes per day, and much more during hurricanes.

Chesters holds a PhD in astronomy from the University of Maryland, College Park. Before joining Goddard in 1978, he worked for Computer Science Corporation, developing radiation transfer code. He has captained the NASA tennis team, still manages the Goddard tennis club ladder, and maintains the club’s amazingly popular website.