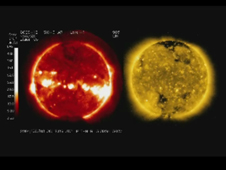 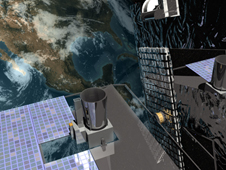 > View larger
Artist's concept of GOES-O in orbit above Earth. Credit: NASA/Honeywell/C. Meaney The series of Geostationary Operational Environmental Satellites known as GOES provide daily satellite images of weather here on Earth, but they also provide scientists with solar data and space weather observations in geosynchronous (over a fixed location on Earth's surface) orbit. NASA has just released a four-minute educational video called "A Weather Satellite Watches the Sun" explaining the uses of space weather instruments on the GOES satellites.

"Space weather" means the conditions on the sun, in the solar wind, and in the space surrounding Earth that affects human activities and technological systems. Space weather can affect satellite operations, cell phone reception, Global Positioning System (GPS) use, and power grids. NASA even uses the GOES satellite data to ensure that astronauts in the space shuttle, space station or on space walks are safe from solar particle events. Commercial airlines that fly polar routes also need to know about solar weather as it affects the ionosphere and high-frequency communications that they rely on at high latitudes.

There are two GOES satellites that cover weather conditions in the U.S. and they are positioned over the eastern and western U.S. GOES-13 is the satellite in the GOES EAST position that covers weather on the eastern side of the continental U.S., including the Atlantic Ocean and Gulf of Mexico. GOES-11 is in the GOES WEST position and covers the western half of the U.S. and the Eastern Pacific Ocean.

The EPS accurately measures the number of particles over a broad energy range, including protons, electrons, and alpha particles, and is used to provide alerts and warnings of hazardous conditions. The magnetometer sensors measure the Earth's magnetic field and provide alerts of changes in the solar wind.

The XRS is an x-ray telescope that observes and measures the sun's solar x-rays in order to provide alerts for potential disruptions in radio communications and degradation in GPS signals. The EUVS is an extreme ultra-violet sensor that measures ultraviolet emissions from the sun. These ultraviolet emissions heat the Earth's upper atmosphere and affect the drag on low-orbiting spacecraft.

The final instrument on GOES satellites that helps monitor space weather is called the Solar X-Ray Imager, or SXI. Every minute the SXI captures an image of the sun's atmosphere in X-rays and provides the space weather forecasters with the necessary information to forecast alerts of potential harmful conditions to space and ground systems.

The SPWC is the nation's civilian "space weather" center. SPWC receives, monitors, and interprets a wide variety of solar terrestrial data and issues reports, alerts, warnings, and forecasts for special events such as solar flares and geomagnetic storms.

To see the Movie "A Weather Satellite Watches The Sun," visit:


For more information about NOAA, visit: