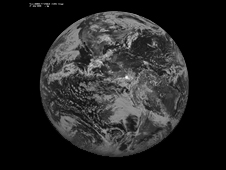 From approximately 35,786 km (22,236 miles) in space, NOAA's newest Geostationary Operational Environmental Satellite -- GOES-14 -- took its first full-disk visible image of the earth on July 27, 2009 at 2:00 p.m. EDT. GOES-14, launched on June 27, 2009, from Cape Canaveral, Fla., joins three other NOAA operational GOES spacecraft that help the agency's forecasters track life-threatening weather and solar activity that can impact the satellite-based electronics and communications industry. After five more months of tests, GOES-14 will be placed in orbital storage mode, ready for activation if any of NOAA's operational GOES spacecraft experiences trouble. Credit: NASA/NOAA/GOES Project
> Larger image GREENBELT, Md. -- The latest Geostationary Operational Environmental Satellite, GOES-14, provided its first visible full disk image of Earth on July 27, at 2:00 p.m. EDT. The prime instrument on GOES, called the Imager, is taking images of Earth with a 1 kilometer (km) or 0.62 mile resolution from an altitude of 36,000 km (22,240 miles) above Earth’s surface, equivalent to taking a picture of a dime from a distance of seven football fields.

The GOES satellite system aids forecasters in locating severe weather events and is instrumental in providing early warnings for residents located in the surrounding areas. "Being able to predict the path of a hurricane with reasonable certainty and only evacuating the areas at risk saves communities roughly a million dollars per mile," Renkevens stated.

"This GOES-14 image also shows a mostly cloud-free southwest United States, with a blanket of low clouds along over the Pacific Ocean off the west coast," stated Renkevens.

The Imager was built by ITT Industries, Inc. in Fort Wayne, Ind. The Imager is mounted on an ultra-stable optical bench on a spacecraft built by Boeing Space & Intelligence Systems of El Segundo, Calif. Star trackers on the spacecraft provide the attitude reference in order to point the instruments and keep the images jitter-free.

"Capturing this first sharp image is a major milestone for our GOES team. It represents a culmination of this team’s hard work and dedication. We still have more to do but full mission success is clearly in our sights," stated Andre’ Dress, the NASA GOES N Series Deputy Project Manager, at NASA Goddard Space Flight Center, Greenbelt, Md.

Launched as GOES-O on June 27, 2009, the satellite was renamed GOES-14 after reaching geostationary orbit on July 8, 2009. The satellite is now approximately 22,300 miles above Earth’s surface located at 89.5 west longitude where it will remain during the 5 month checkout period.

Boeing Space and Intelligence Systems handed over engineering control of GOES-14 to NASA on July 18, at the NOAA Satellite Operations Facility in Suitland, Md.

NASA expects to complete checkout of the satellite by mid-December and hand it over to NOAA for operational use. NOAA expects to store GOES-14 on-orbit at 105 west longitude until an operational need arises. NOAA also expects to deorbit GOES-10 within the next six months due to fuel depletion.

NOAA manages the GOES program, establishes requirements, provides all funding and distributes the environmental satellite data for the United States. NASA Goddard procures and manages the design, development and launch of the satellites and provides some ground station components for NOAA. Boeing Space and Intelligence Systems built GOES-O and provided the commercial launch services through Boeing Launch Services and the United Launch Alliance.

For more information about the GOES-O/14 mission and program visit: