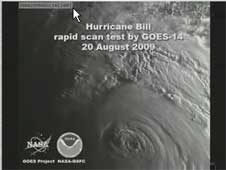 Earlier this summer, NASA launched the latest Geostationary Operational Environmental Satellite, GOES-O. Recently operations have been turned over to the National Oceanic and Atmospheric Administration (NOAA) and the satellite was renamed GOES-14. The satellite is still being tested in orbit, and it captured video of Hurricane Bill on August 20, while it was on its way to Bermuda.

The spectacular video is a collection of a few quick movies put together by the GOES-14 team from the NASA GOES Project at NASA's Goddard Space Flight Center in Greenbelt, Md.

The video includes an impressive zoom-out, showing how big the hurricane is, relative to the hemisphere. Bill is a large hurricane, more than 1,200 kilometers (746 miles) across, and the storm’s partially cloud-filled eye is nearly 50 kilometers (31 miles) wide.