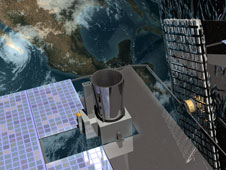 Artist's concept of the GOES-O spacecraft. Credit: NASA/Honeywell Tech Solutions, C. Meaney On June 27, 2009, the Geostationary Operational Environmental Satellite, GOES-O, soared into space during a spectacular launch from the Cape Canaveral Air Force Station in Florida. GOES-O has now been renamed and its solar array has been deployed.

The National Oceanic and Atmospheric Administration's (NOAA) GOES-O satellite is the second in the GOES N Series that will improve weather forecasting and monitor environmental events around the world.

Since the launch, the NASA operation and engineering team located at the NOAA Satellite Operation Facility have performed a series maneuvers designed to place the satellite in its proper orbit. They completed five liquid apogee motor burns designed to raise the GOES-O orbit perigee to approximately 22,300 miles above the Earth. GOES-O became GOES-14 once it reached its geosynchronous orbit at 89.5 degrees west longitude on July 8, 2009.

The operations team successfully deployed the solar array on July 9 at 4:55 p.m. EDT. After the deployment the spacecraft was put in a Sun Acquisition Mode. All the spacecraft subsystems are reporting nominal performance," said Andre' Dress GOES N-P Deputy Project Manager at NASA's Goddard Space Flight Center, Greenbelt, Md. The magnetometer boom deployment is planned for July 13, 2009. The first visible image from the ITT built Imager is planned for July 27, 2009.

"Today the GOES O spacecraft and the operation team achieved another critical milestone with the deployment of the solar Array," Dress said. "The spacecraft continues to meet all our expectations and the performance of the operations team is exemplary. We have much more work yet to do, but we are elated with the success to date."

Boeing will hand over engineering control to NASA for daily commanding on July 17, 2009. It will take NASA approximately 5 months to complete the on-orbit checkout and then operational control of GOES-14 will be transferred to NOAA. The satellite will be checked out, stored in orbit and available for activation should one of the operational GOES satellites degrade or exhaust its fuel.

NASA contracted with Boeing to build and launch the GOES-14 spacecraft. NASA's Launch Services Program at NASA's Kennedy Space Center in Florida supported the launch in an advisory role. NOAA manages the GOES program, establishes requirements, provides all funding and distributes environmental satellite data for the United States. Goddard procures and manages the design, development and launch of the satellites for NOAA on a cost-reimbursable basis.