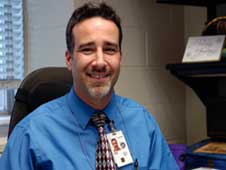 In the latest episode of the Space Place Live, animated young hosts Kate and Kyo interview a cartoon version of the GOES satellite Deputy Project Manager, Andre Dress. Andre works at NASA's Goddard Space Flight Center in Greenbelt, Maryland. He talked with Kate and Kyo about the new GOES-O weather satellite as it is being prepared for launch. There have been 13 GOES satellites launched already. Before they launch, they are named with a letter, once they're in orbit, the name changes to a number, so GOES-O would become GOES-14.

"GOES means Geostationary Operational Environmental Satellite," Dress said during his interview. That means the satellite stays in a fixed position above the Earth as it rotates in orbit so it can keep an eye on the weather in a fixed area over the U.S. NASA manages the development and launch of the satellites for the National Oceanic and Atmospheric Administration, also called NOAA. Once in orbit and after check out, NOAA takes over the satellite's daily operations.

During the ten minute cartoon interview, Andre explains what the GOES satellite will do, where it is located in orbit, and how the satellite is launched. He also explains why it's so important that scientists rehearse what they're going to say during and after the launch. Because Andre Dress will be in that group of engineers that will be practicing, it will really be a "Dress Rehearsal."

The actual launch will happen during the summertime in 2009.

The Space Place is produced by the jet Propulsion Laboratory (JPL). JPL is managed for NASA by the California Institute of Technology in Pasadena, Calif. New episodes of "Space Place Live" with hosts Kate and Kyo are always being made. The website is geared toward elementary school students and teachers. It is updated daily, with events, games, projects, animations, cool subjects, amazing facts and section for friends to share news from their communities, so kids should bookmark it on their computer and check it daily. It's both fun and a great learning experience.

Another website, scijinks.gov, is for middle-school-age students. It includes games and fun facts about weather and Earth science and technology, with GOES and POES emphasis paid for by NOAA.