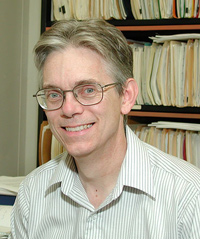 David Thompson is the Fermi Deputy Project Scientist who serves as the Multiwavelength Coordinator for the Large Area Telescope (LAT) on Fermi. He helps plan cooperative observations with many other telescopes in order to maximize the scientific return from Fermi. He has worked in the Astrophysics Science Division of NASA Goddard Space Flight Center, in Greenbelt, Md. since 1973. He is the leader of the team that built the Anticoincidence Detector for the Large Area Telescope on Fermi.

Dave Thompson's research spans all areas of astrophysics related to high-energy gamma rays. Prior to coming to Goddard, he was a Research Associate at the University of Maryland. His early work used a balloon-borne gamma-ray telescope to study gamma rays produced by cosmic ray interactions in the Earth's upper atmosphere. In 1972, with the launch of the SAS-2 gamma-ray telescope, he began studying cosmic sources of high-energy gamma rays, especially diffuse Galactic radiation and gamma-ray pulsars.

When EGRET on the Compton Gamma Ray Observatory (CGRO) was launched by the Space Shuttle Atlantis on April 5, 1991, his emphasis shifted back to astrophysics. He has been involved in high-energy studies of pulsars, blazars, gamma-ray bursts, diffuse radiation, and unidentified sources.

He is a member of the Goddard Speakers' Bureau. His topics are "Viewing the Violent Universe: The Compton Gamma Ray Observatory," "A Guided Tour of the Universe," and "Exploding Stars, Neutron Stars, and Black Holes." He also chairs the Goddard Scientific Colloquium Committee.