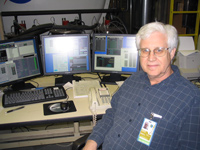 Charles A. Meegan is an Astrophysicist at the Space Science Department of NASA's Marshall Space Flight Center, in Huntsville, Ala. His prime research area is in Gamma-Ray Astronomy.

Since 2000, he has been the Principal Investigator for the Fermi Burst Monitor (FBM) instrument. The FBM was selected as a complementary instrument for the Fermi mission and will be sensitive to X-rays and gamma rays with energies between 8 keV (Kilo Electron Volts) and 25 MeV (Mega Electron Volts). The development of the Fermi Burst Monitor and analysis of its observational data is a collaborative effort between the National Space Science and Technology Center in the U.S. and the Max Planck Institute for Extraterrestrial Physics (MPE) in Germany.

Meegan holds a Ph.D. in Physics from the University of Maryland in 1973, and received a B.S. in Physics from the Rensselaer Polytechnic Institute. He has been an Astrophysicist in the Space Science Department of NASA's Marshall Space Flight Center, Huntsville, Ala. since 1978. Prior to that, Meegan worked as a National Academy of Sciences/Nuclear Regulatory Commission Research Associate at NASA Marshall from 1976-1978. From 1975-1975 he was a Research Associate and Lecturer in Space Physics and Astronomy, at Rice University, Houston.

Meegan has had several special assignments related to the Fermi mission. Since the year 2000, he has been the Fermi Burst Monitor, Principal Investigator. He was also the Chairman of the 4th Huntsville Symposium on Gamma-Ray Bursts. From 1991-1996, Meegan was an Astro Mission scientist. Prior to that, from 1982 to 1984 he was an Assistant Project Scientist on the Hubble Space Telescope. Meegan was again involved with Gamma-Rays in 1979 during his time on the Gamma Ray Observatory Technical Advisory Committee. He was also a co-Investigator on the Burst and Transient Source Experiment, from 1979 to 2002.

Meegan's awards include: the NASA Marshall Director's Commendation in 1993 for development of BATSE flight software, and the NASA Exceptional Scientific Achievement Medal in 1993 for research on gamma-ray bursts. Also in 1993, he was named Sigma Xi Huntsville Researcher of the Year for research on gamma-ray bursts. In 1995, he received the NASA Exceptional Achievement Medal for his work on the Astro-2 mission.

For more information about the Fermi Burst Monitor, visit on the Web:
http://www.batse.msfc.nasa.gov/gbm/

For more information about the ASTRO-2 Mission, visit on the Web:
http://praxis.pha.jhu.edu/astro2/astro2_mission.html

For more information about NASA Marshall Space Flight Center, visit on the Web:
http://www.nasa.gov/centers/marshall/home/index.html
› Back To Top