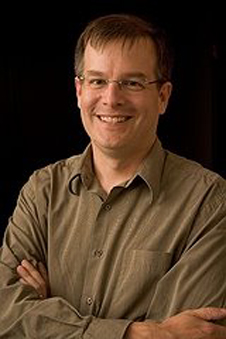 Image courtesy Stephen Thorsett Stephen E. Thorsett is a Professor in the Department of Astronomy and Astrophysics at the University of California (UC), Santa Cruz. He has been a member of the Gamma-ray Large-Area Space Telescope Science Working Group since 2000.

His primary research activities are centered on broadband observations of compact objects -- the white dwarfs, neutron stars, and black holes that mark the ultimate end of a star's life. Over the years, he has mostly been concerned with radio pulsars. Some of his work is aimed at understanding the basic properties of these objects, including distances, velocities, masses, radii, and radiation mechanisms. For many years, he has also been interested in how we can use radio pulsars as laboratories to study nuclear and gravitational physics in extreme conditions. He works with many collaborators, using all of the major national radio telescope facilities, as well as the Hubble Space Telescope. He's also actively involved with the Gamma-ray Large Area Space Telescope, launched in early June 2008, and with science planning for a Small Explorer class X-ray mission called NuSTAR, scheduled for launch in 2011.

He received his Ph.D. and Master's degrees in Physics from Princeton University in 1991 and 1989, respectively. He graduated from Carleton College in Northfield, Minn. in 1987 with a B.A. in Mathematics.

Stephen Thorsett has been working with NASA on gamma-ray and related projects since 1992. In addition to being on the GLAST Working Group, he's been the chair of several science teams, a Swift Guest Investigator, and Co-Investigator on Swift and Spitzer missions as well as in various projects investigating gamma-ray bursts.

Thorsett has won many awards over his career. In 1997 he was an Alfred P. Sloan Fellow. In 1994 he won the Ernest F. Fullam Award, Dudley Observatory. 1988 brought him the General Electric Foundation Graduate Fellowship, and in 1987 he was awarded the National Science Foundation Graduate Fellowship. In 1987 he was also awarded the Joseph Henry Prize from Princeton University, and the Tektronix Foundation Award. Also in 1987, he was elected a member of Phi Beta Kappa and Sigma Xi in 1987.

Thorsett has taught a variety of courses including, "The Violent Universe," "High Energy Astrophysics," "Compact Objects" and "Radio Astronomy."