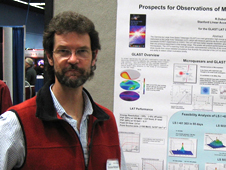 Richard Dubois has managed the scientific computing enterprise for Fermi's Large Area Telescope (LAT) since 2000. In this role, he has coordinated the development of the instrument simulation and event reconstruction code into a production system, as well as the large-scale automated processing systems for the science data which take the raw data and produce the photon descriptions used in science analysis.

On the astrophysical side, Richard has focused on microquasars - galactic analogues of the supermassive quasars - to learn about how the acceleration processes happen and how gamma ray energies connect to the cycles seen in the lower energy ranges.

Born in Montreal, Canada, Richard received his B.Sc. in physics at McGill University and Ph.D. in particle physics at the University of British Columbia. Richard became a post-doc at the Stanford Linear Accelerator Center, Menlo Park, Calif. in the early 1980s, working on the DELCO experiment (with Bill Atwood) and then the SLAC Large Detector (SLD), an experiment exploring the properties of the Z particle. By this time he was a staff scientist responsible for the scientific computing for SLD, valuable experience that was applied to Fermi.

> More information about SLAC and the SLD
› Back To Top