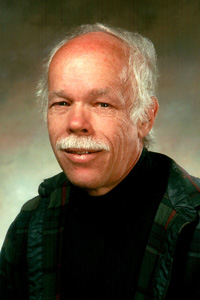 Bill Atwood is an Adjunct Professor of Physics at the Santa Cruz Institute for Particle Physics, University of California Santa Cruz. He conceived of the idea for Fermi in partnership with Peter Michelson of Stanford University. Bill was the originator and principal architect of the LAT concept, and he demonstrated its potential using GISMO, a detector simulation/analysis package. In addition to his technical role, he played a part in shaping the alliance of physicists from the U.S, Europe, and Japan that formed the LAT collaboration.

During the construction phase of the Fermi mission, Atwood led the effort to write the reconstruction software for the LAT. Building on years of experience in the High Energy Particle Physics world, the software provides a state-of-the-art, complete analysis of each event including energy optimization, image perfection, as well as the daunting issue of background rejections.

With the imminent arrival of first data, Atwood is turning his full attention to his science passion: fundamental physics. The Fermi data will offer the possibility of discoveries of cosmological primordial relics such as inter-galactic magnetic fields, testing established physical laws such as the constancy of the speed of light independent of energy, and what was the genesis of the giant black holes found in the centers of galaxies.

He holds a B.S. in Physics from the California Institute of Technology, and a Ph.D. from Stanford University.

For publications, teaching experience and talks given, please visit:
http://scipp.ucsc.edu/~atwood/