Solar System: Sun, Moon, and Earth
Ordinary stars are simply not energetic enough to generate detectable levels of gamma rays. The one exception is the Sun, but only because of its close proximity to Earth. "If you exclude flares, the Sun is pretty quiet," says LAT science team member David Thompson of NASA's Goddard.

But the Sun, of course, sporadically unleashes powerful flares, which spew particles into the solar system at high velocities. These flares can turn our star into an extremely bright gamma-ray source for several hours. Even though astronomers have studied solar flares for decades, they still don't know how the Sun generates these outbursts. Astronomers also lack a detailed understanding of how the Sun accelerates particles that produce the gamma rays seen in flares.

GLAST could lead to important breakthroughs in this area. It will complement NASA's Reuven Ramaty High Energy Solar Spectroscopic Imager (RHESSI) mission, a satellite launched in 2002. RHESSI detects solar-flare gamma rays with energies up to about 20 MeV. The LAT will extend this range to higher than 300 GeV, which will enable astronomers to test theories that have been developed based on data from RHESSI and other instruments.

The timing of the GLAST mission is ideal for solar studies, since the Sun recently passed through a minimum in its 11-year sunspot cycle. Solar activity is beginning to increase, and is expected to peak around 2011 or 2012. "No other instrument will be available to observe the Sun in the LAT's energy band during the upcoming solar maximum," says solar physicist Gerald Share of the University of Maryland, College Park.

Solar flares will also trigger the GLAST Burst Monitor (GBM), which covers an energy range that overlaps that of RHESSI. "The GBM may detect more than 100 flares containing nuclear radiation during this new cycle, Solar Cycle 24," adds Share.

Scientists will use LAT and GBM data to test theories of flare production. According to most current theories, flares are produced when solar magnetic-field lines snap and then reconnect. These processes release staggering amounts of energy, and they could accelerate particles to energies high enough to produce gamma rays. Some solar flares produced such intense gamma-ray emission that they saturated the EGRET instrument on NASA's Compton Gamma-ray Observatory. 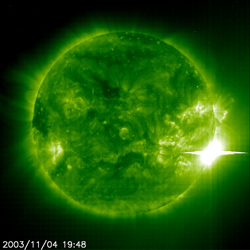 Image left: The Sun unleashed a flare on November 4, 2003 that could be one of the most powerful ever witnessed. GLAST will shed considerable light on the origin of these explosions and how particles are accelerated. Credit: NASA SOHO

But with its more modern design, the LAT should provide crucial data that will help fill in the gaps in our understanding of solar flares and particle acceleration. Improved understanding of space weather, in turn, will make future human space missions safer. "Solar-flare particles can cause severe damage to satellites, and to astronauts if they are not protected," says Thompson.

GLAST will even be able to detect gamma rays coming from the Sun during the quiet phases of its 11-year cycle. These gamma rays come from cosmic rays impacting the Sun. GLAST studies of the Sun’s quiescent phase should tell scientists quite a bit about the solar magnetic field.

GLAST may also yield interesting results pertaining to other solar-system bodies. Surprisingly, the Moon is a moderately bright gamma-ray source. As Thompson says, "The only part of the electromagnetic spectrum where the Moon is brighter than the Sun is gamma rays."

Being a cold, mostly inert object, the Moon is utterly incapable of producing gamma rays on its own. But cosmic-ray particles slamming into the lunar surface produce secondary gamma rays. The LAT will watch the Moon change position from hour to hour as it orbits Earth. The LAT will see higher-energy gamma rays emanating from the Moon than could be seen by EGRET, and the LAT's spatial resolution is superior. However, scientists are not anticipating any dramatic discoveries.

Earth itself is also a bright gamma-ray source. Fortunately for us, our planet's magnetic field and atmosphere prevent gamma rays from hitting the surface. But cosmic-ray interactions produce a steady and significant flux of gamma rays in the upper atmosphere. For the most part, the LAT will be looking away from Earth to avoid this emission. The BATSE instrument on Compton picked up low-energy gamma rays associated with lightning storms, along with energetic atmospheric phenomena at higher altitudes, such as jets and sprites. The GBM, and possibly even the LAT, will pick up many of these events.

Other solar-system objects are probably either too small or too far away to be detectable by GLAST. by Robert Naeye
›Back To Top