Neutron Stars
When the core of a massive star undergoes gravitational collapse at the end of its life, protons and electrons are literally scrunched together, leaving behind one of nature's most wondrous creations: a neutron star. Neutron stars cram roughly 1.3 to 2.5 solar masses into a city-sized sphere perhaps 20 kilometers (12 miles) across. Matter is packed so tightly that a sugar-cube-sized amount of material would weigh more than 1 billion tons, about the same as Mount Everest!

Most known neutron stars belong to a subclass known as pulsars. These relatively young objects rotate extremely rapidly, with some spinning faster than a kitchen blender. They beam radio waves in narrow cones, which periodically sweep across Earth like lighthouse beacons. But as GLAST Project Scientist Steve Ritz of NASA Goddard points out, "With magnetic fields trillions of times stronger than Earth's, pulsar magnetic fields are high-energy particle accelerators." The magnetospheres of some pulsars accelerate particles to such high energies that they are relatively bright gamma-ray sources.

Astronomers have found less than 2,000 pulsars, yet there should be about a billion neutron stars in our Milky Way Galaxy. There are two reasons for this shortfall. One is age: most neutron stars are billions of years old, which means they have plenty of time to cool and spin down. Without much available energy to power emissions at various wavelengths, they have faded to near invisibility. But even many young pulsars are invisible to us with radio telescopes because of their narrow lighthouse beams. "Because pulsar beams are much broader in gamma rays, GLAST will allow us to detect some of the youngest, most energetic pulsars in our galaxy," says GLAST Interdisciplinary Scientist Stephen Thorsett of the University of California, Santa Cruz. "Getting a much more complete sample of the Milky Way's population of neutron stars is one of the most important ways that GLAST will advance our understanding of the life cycle of stars." 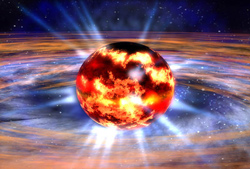 Image right: A neutron star is the dense, collapsed core of a massive star that exploded as a supernova. The neutron star contains about a Sun's worth of mass packed in a sphere the size of a large city. Credit: NASA/Dana Berry.

+ High resolution image
The EGRET instrument on NASA's Compton Gamma-ray Observatory saw six pulsars, but the LAT has the sensitivity to find dozens or perhaps hundreds. Among these discoveries, scientists hope to find pulsars similar to Geminga, which is relatively bright in gamma rays but is strangely quiet in radio waves, perhaps because its radio beam doesn't point toward Earth. Geminga is roughly 300,000 years old, which makes it middle-aged in the pulsar life cycle. If it weren’t so close to Earth (about 500 light-years), EGRET would not have seen it. The LAT will be able to see much fainter pulsars, many of which will be much older than Geminga. Pulsars spin-down as they age, and this should weaken particle acceleration, which in turn should cause their gamma-ray flux to weaken. The LAT should thus be able to tell scientists about this rate of decline, which in turn will yield precious clues about the particle-acceleration mechanism.

Finding new gamma-ray pulsars will be nice, but as LAT science team member Alice Harding of NASA Goddard notes, "GLAST is really about studying the physics of these sources." For example, GLAST will probably be able to determine whether pulsar magnetic fields are so strong that gamma-ray photons packing more than about 4 or 5 GeV of energy can transform themselves into pairs of particles and antiparticles. EGRET observations suggest this process might be occurring in the magnetosphere of a pulsar in the constellation Vela. But EGRET did not have enough sensitivity at high gamma-ray energies to see if there is a sharp cutoff in gamma rays above 4 or 5 GeV. In the LAT's first few months of operation, it should be able to see if the Vela pulsar exhibits this sharp cutoff — an unambiguous signature of pair production. "A neutron star is the only place where we can measure this effect," says Harding.

EGRET observations showed that gamma rays dominate the total radiation emitted by young pulsars, which are rapidly spinning down. Moreover, EGRET data showed that variations in the high-energy gamma-ray emission probably arise from the changing view into the pulsar magnetosphere as the neutron star spins. The LAT will have the ability to map pulsar magnetospheres and provide unique information regarding the physics of the pulsed emission, and perhaps even answer the long-standing mystery of how the pulses are actually produced.

By monitoring the pulses of extremely fast rotators, known as millisecond pulsars, which rotate hundreds of times per second, GLAST will probably observe effects due to special relativity. "The pulses are so distorted by relativistic effects that we have to filter all of those out to figure out what's really happening at the pulsar itself," says Harding. She notes that these observations might dispel the common "lighthouse" model of pulsars, showing that what we see is really a relativistic distortion of the pattern emitted by the pulsar.

GLAST will also advance scientists' understanding of how pulsars generate particle winds, and how these winds interact with the surrounding medium. The LAT may find several dozen new examples of pulsar wind nebulae, and provide much more detailed observations of the only example seen by EGRET: the one surrounding the pulsar in the Crab Nebula. Virtually nothing is known about the gamma-ray emission of pulsar wind nebulae in the region between 10 and 100 GeV, and yet that might be where most of the exciting action is taking place. The LAT will fill in that gap.

GLAST's other main instrument, the GLAST Burst Monitor (GBM), will likely pick up extremely energetic flares from neutron stars with ultrapowerful magnetic fields. These so-called magnetars occasionally unleash flares that pack more energy in a fraction of a second than the Sun will emit in tens of thousands or even hundreds of thousands of years. The flares are probably ignited when a massive shift in the crust (a starquake) triggers a large-scale untwisting and rearrangement of magnetic-field lines, causing them to snap and release vast amounts of pent-up magnetic energy in the form of gamma rays, X rays, and particles.

But theorists lack a detailed understanding of this process. NASA's Swift satellite has detected several of these events, including a superflare from the magnetar SGR 1806-20 on December 27, 2004. The GBM and the LAT combined cover a much wider range of energies than Swift, so when combined with observations from other spacecraft, scientists may be able to assemble a more detailed picture of what powers these incredible outbursts.
by Robert Naeye
›Back To Top