Milky Way Galaxy
Not counting transient events such as gamma-ray bursts, the brightest object in the gamma-ray sky is the plane of our Milky Way Galaxy. This glow results from a vast sea of cosmic-ray particles slamming into interstellar gas and dust, generating gamma rays. In fact, 75% of the gamma rays in our galaxy come from these cosmic-ray interactions. This bright gamma-ray glow gives the GLAST science team a golden opportunity to study the structure, composition, and dynamics of the interstellar material that pervades our home galaxy.

But as Large Area Telescope science team member David Thompson of NASA Goddard, explains, "It’s not easy to understand something when you’re in the middle of it." Adding to the complexity is the fact that our galaxy is filled with many different types of particles and energy sources, including protons, electrons, electromagnetic radiation, magnetic fields, and so forth — most of which have not been accurately measured.

To study our galaxy, theorists create models of how these different particles interact with magnetic fields in different locations and with different strengths. Astronomers can then compare these models to actual observations made at radio, infrared, optical, ultraviolet, and X-ray wavelengths to see how well they match the data. The LAT will contribute vital data that will enable theorists to constrain and improve their models. 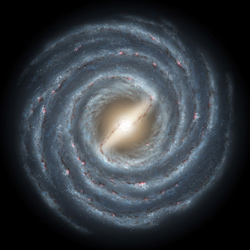 For example, the EGRET instrument on NASA’s Compton Gamma-ray Observatory saw hints that there may be clumps of gas in our galaxy that are not seen by radio telescopes. GLAST observations of the galactic plane should be able to help astronomers pin down whether or not these clumps are real. They might also reveal changes in the interstellar medium due to recent supernovae.

Having an accurate model of gamma-ray production within our galaxy is not only important in its own right, it is vital for the measurement of localized gamma-ray sources. The sources are seen against the bright background of the Milky Way glow. If the galaxy is not modeled correctly, then information about other objects could be distorted. As GLAST Program Scientist F. Rick Harnden Jr. notes, "The same gamma rays that measure galactic structure are also a background for other observations."
by Robert Naeye
›Back To Top