GREENBELT, Md. - NASA’s Gamma-ray Large Area Space Telescope (GLAST) has arrived at the Naval Research Laboratory (NRL) in Washington for its final round of testing. 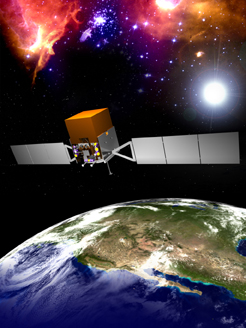 On November 26, the spacecraft began its drive across the country in a specially modified truck. GLAST arrived at NRL on November 28. At NRL, the spacecraft will undergo thermal and vacuum testing to ensure that it can survive the 90-degree F (50-degree C) temperature swings it will experience in Earth orbit.

"Although gamma rays can travel billions of light-years across the universe, they can’t penetrate Earth’s atmosphere, so we must launch our instruments into space. We need to ensure the observatory can function in the space environment, and that is the main goal of the testing about to take place," says GLAST project scientist Steve Ritz of NASA Goddard. 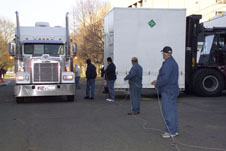 After GLAST finishes the thermal-vac testing, it will be trucked or flown to Cape Canaveral, Fla. There, the solar arrays and flight battery will be added to the spacecraft, and it will be fueled with propellant. The launch, aboard a Delta II Heavy rocket, is scheduled for no earlier than May 29, 2008.

GLAST will carry two instruments, the Large Area Telescope (LAT) and the GLAST Burst Monitor (GBM), to study the extreme universe, where nature harnesses energies far beyond anything scientists can achieve in their most elaborate experiments on Earth. GLAST may answer the mystery of how black holes accelerate jets of particles to near-light speed, and it may fill in gaps in our knowledge of stupendously powerful explosions known as gamma-ray bursts (GRBs). 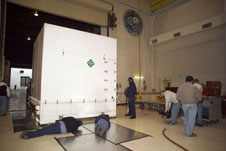 Image right: The shipping container has been transported to NRL's high bay where workers are installing air pads used move the container around in the clean environment. Click image for enlargement. Credit: NRL

The LAT, which works like a particle detector rather than a conventional telescope, greatly improves upon all previous gamma-ray instruments. It is more than 30 times as sensitive to faint sources, it covers a much broader range of gamma-ray wavelengths, it can locate sources much more precisely, and it can measure the arrival time of each gamma ray more accurately.

"With the LAT we will be able to pinpoint locations in the universe where matter is accelerated to extremely high-energies, shedding new light on the origin of cosmic rays," says LAT principal investigator Peter Michelson of Stanford University in Palo Alto, Calif. "We will also observe neutron stars and learn how they produce their lighthouse-like particle beams. The LAT will help astronomers determine the nature of hundreds of gamma-ray sources seen by previous missions, but whose nature remains shrouded in mystery. Most exciting of all, the LAT will find thousands of previously unknown gamma-ray sources." 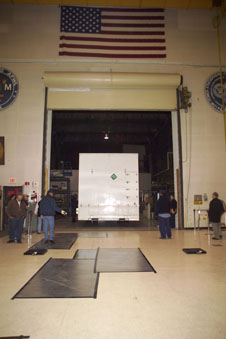 "We expect that the GBM will detect about 200 GRBs per year," said GBM principal investigator Charles "Chip" Meegan of NASA’s Marshall Space Flight Center in Huntsville, Ala. "With the LAT and GBM working together, and with other satellites, we hope to understand how the gamma rays are actually produced in GRBs, and whether GRBs create high-energy gamma rays that were beyond the range of previous satellites."

From its perch in low-Earth orbit, GLAST will also test key concepts in fundamental physics, such as whether all forms of light -- regardless of wavelength -- travel at the same speed. It might help physicists determine the nature of dark matter by catching the gamma-ray signature of dark-matter particles annihilating one another. It might even detect gamma rays from exploding black holes.

NASA’s GLAST mission is an astrophysics and particle physics partnership, developed in collaboration with the U.S. Department of Energy, along with important contributions from academic institutions and partners in France, Germany, Italy, Japan, Sweden, and the U.S.