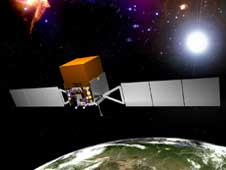 NASA announced Thursday that members of the general public from around the world will have a chance to suggest a new name for the cutting edge Gamma-ray Large Area Space Telescope, otherwise known as GLAST, observatory before it launches in mid-2008. The satellite will observe some of the most powerful forces known in the universe.

"The idea is to give people a chance to come up with a name that will fully engage the public in the GLAST mission," said Steve Ritz, the mission's project scientist at NASA's Goddard Space Flight Center, Greenbelt, Md.

The mission's scientific objectives are to:


"We're looking for name suggestions that will capture the excitement of GLAST's mission and call attention to gamma-ray and high-energy astronomy. We are looking for something memorable to commemorate this spectacular new astronomy mission," said Alan Stern, associate administrator for Science at NASA Headquarters in Washington. "We hope someone will come up with a name that is catchy, easy to say and will help make the satellite and its mission a topic of dinner table and classroom discussion." 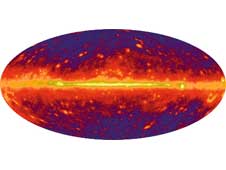 This is a simulated GLAST sky map (how GLAST will see space). Image credit: NASA/Sonoma State University/Aurore Simonnet
> Click to view larger image.
Suggestions for the mission's new name can be an acronym, but it is not a requirement. Any suggestions for naming the telescope after a scientist may only include names of deceased scientists whose names are not already used for other NASA missions. All suggestions will be considered. The period for accepting names closes on March 31, 2008. Participants must include a statement of 25 words or less about why their suggestion would be a strong name for the mission. Multiple suggestions are encouraged.

To submit a suggestion for the mission name, visit:

Anyone who drops a name into the "Name That Satellite!" suggestion box on the Web page can choose to receive a "Certificate of Participation" via return e-mail. Participants also may choose to receive the NASA press release announcing the new mission name. The announcement is expected approximately 60 days after launch of the telescope.