To this day GRBs remain one of the greatest mysteries of modern astronomy. Despite lasting only a few milliseconds to several minutes, they are the brightest gamma-ray phenomena known, outshining all other sources of gamma rays combined. "An individual GRB can release in a matter of seconds the same amount of energy that our Sun will radiate over its 10-billion-year lifetime," says GLAST Deputy Project Scientist Neil Gehrels of NASA's Goddard Space Flight Center in Greenbelt, Md.

Astronomers have made considerable strides in recent years in understanding GRBs, progress that can be directly attributed to a series of spectacularly successful space missions. The Burst and Transient Source Experiment (BATSE) on NASA's Compton Gamma-ray Observatory detected several thousand GRBs, and showed that they come from random directions on the sky — which strongly suggested that they are not of galactic origin and must occur at great distances. In the late 1990s, the Italian/Dutch BeppoSAX satellite was able to pinpoint the location of several GRBs, which enabled X-ray, optical, and radio telescopes to monitor their afterglows. This was a crucial development, since it enabled astronomers for the first time to measure distances to bursts and observe how they interacted with their surrounding environments. The now-defunct HETE-2 satellite and the currently operating NASA Swift satellite have significantly extended and improved these capabilities, and have lofted our study of GRBs to new heights.

Thanks to these missions, astronomers now think that most GRBs, those lasting 2 seconds or longer (known as long GRBs), are associated with the explosive deaths of massive stars. As the star's core collapses at the end of its life, it forms a black hole or neutron star. Computer simulations show that infalling stellar gas can tap the rotational energy of a rapidly spinning core, and magnetic fields can channel that material into two jets traveling at nearly the speed of light. These jets punch their way out of the dying star along its rotation axis. The gamma rays are produced by shock waves created either from material colliding within the jet, or from the jet slamming into surrounding material. 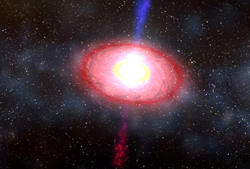 Image right: Some gamma-ray bursts may result from a collision between two neutron stars or a black hole and a neutron star. This illustration depicts the turbulent aftermath of such a collision. Credit: Dana Berry/NASA
+ High resolution image

But despite the new revelations from Swift and other missions, many crucial questions remain unanswered. What types of stars die as GRBs? What is the composition of the jets? How are the gamma rays in the initial burst produced? What is the total energy budget of a GRB? How does the central engine work? How wide are the jet opening angles? How do the jets interact with other material to produce the gamma rays? Swift has actually complicated the picture by showing that GRBs are much more diverse in their properties than astronomers had imagined prior to the spacecraft's launch in November 2004. As the saying goes, "If you've seen one GRB, you've seen one GRB." In fact, some GRBs don't seem to fall into either the long or short category and the origin of these "hybrid bursts" remains shrouded in mystery.

"GLAST is a multipurpose observatory designed to study many phenomena besides gamma-ray bursts, but it promises to greatly extend our knowledge of these incredibly powerful explosions," says Peter Michelson of Stanford University, who is the Principal Investigator of GLAST's Large Area Telescope (LAT).

The GLAST team specifically built the other science instrument, the GLAST Burst Monitor (GBM), to address this mystery. "The GBM will detect approximately 200 GRBs per year," says GBM Principal Investigator Charles "Chip" Meegan of NASA's Marshall Space Flight Center in Huntsville, Alabama. "It’s amazing that gamma-ray bursts are so powerful that a small detector you could hold in one hand can observe them from distances of billions of light-years."

The GBM and the LAT will work in tandem to attack the problem of GRBs. If the GBM picks up an interesting GRB in a part of the sky that is not in the LAT's field of view at that moment, the spacecraft will slew autonomously so the LAT can study the burst in more detail. The GBM will pick up X rays and gamma rays with energies ranging from 8 keV to 30 MeV. The LAT can pick up gamma rays ranging from 20 MeV to 300 GeV. Former GBM Co-principal Investigator Giselher Lichti of the Max Planck Institute for Extraterrestrial Physics, which built the GBM detectors, notes that the GBM and the LAT together cover an energy range extending from about 10 keV to 300 GeV. "That's seven orders of magnitude in energy coverage for GRBs," he notes. "That exceeds the energy range covered by Swift enormously, thus yielding a wealth of new information about GRBs." The seven orders of magnitude in energy corresponds to 23 octaves on the musical scale, or the equivalent of four full-size piano keyboards side by side.

The LAT's high-energy coverage will give astronomers precious insight into an energy realm that so far has been poorly studied. The Compton Gamma-ray Observatory's Energetic Gamma-Ray Experiment Telescope (EGRET) instrument detected a handful of extremely high-energy gamma rays from a few GRBs. These photons did not seem to behave the same way as those detected at lower energies by the spacecraft's BATSE instrument. Strangely, one of the highest-energy gamma rays arrived at EGRET 90 minutes later than lower-energy gamma rays arrived at BATSE. What causes this delayed emission? GLAST's observations may tell the tale. "We don't understand the very-high-energy range very well; it's bizarre," says GLAST Project Scientist Steve Ritz of NASA Goddard. "That energy range will tell us about the GRB's central engine, so the LAT and the GBM together may be able to tell us how GRBs actually work."

Meegan points out that some bursts actually exploded when the Universe was less than a billion years old. "In fact, we may be seeing back to when the first stars formed," he says. "GRBs may thus turn out to be our best window to the infancy of the Universe."