The Gamma-ray Background
From as far back as the late 1960s, orbiting observatories have found a diffuse background of gamma rays streaming from all directions. "If you had gamma-ray vision and looked at the sky, there would be no place that would be dark," says Large Area Telescope (LAT) team member David Thompson of NASA's Goddard.

To this day, astronomers have not pinned down the source of this gamma-ray background. The leading candidates are unresolved active galactic nuclei (AGN), especially blazars. NASA’s Chandra X-ray Observatory discovered, for example, that dust-enshrouded AGNs were responsible for a background glow seen in X rays. But astronomers don’t know enough about AGN and their gamma-ray-emitting properties to say with absolute certainty that AGNs are the source of the gamma-ray background. It’s quite likely that ordinary galaxies similar to our Milky Way are also an important component of the background, since they have the same cosmic-ray interactions with interstellar material that light up the plane of our galaxy.

The LAT has high enough sensitivity and spatial resolution that it should be able to confirm whether or not AGNs and ordinary galaxies are the culprit. LAT science team members will be able to correlate specific gamma-ray sources with objects seen at other wavelengths. They will also be able to measure the spectral properties of faint LAT sources to see if they match those of blazars. 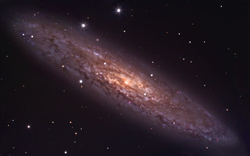 We should also be able to see starburst galaxies," says GLAST Deputy Project Scientist Julie McEnery of NASA Goddard. These are galaxies that are forming stars in huge numbers. The most massive of these stars evolve quickly and explode as supernovae, producing swarms of cosmic rays in the process. "The gamma-ray flux from a galaxy should be a measure of the total energy flux from that galaxy. The LAT can try to verify that relationship between supernovae and the gamma-ray flux," adds McEnery.

"If the background is not unresolved point sources, this would be a huge discovery, and would probably mean the glow is cosmological in origin," says GLAST Project Scientist Steve Ritz of NASA Goddard. If AGNs and ordinary galaxies are not responsible, it could be the result of dark-matter particles annihilating one another or chain reactions caused by ultra-high-energy cosmic rays interacting with interstellar gas. Or it could come from a process that no one has yet conceived. But as Thompson says, "Occam’s razor dictates that we first test the obvious before going to the exotic."
by Robert Naeye
›Back To Top