Dark Matter
The identity of dark matter - the mysterious stuff that makes up about 22% of the Universe’s energy contents - continues to elude scientists decades after they first inferred its existence. The leading candidate that might explain the fundamental make-up of dark matter is a hypothetical particle called the weakly interacting massive particle, or WIMP. But with GLAST, scientists may finally find clear evidence that dark matter is indeed made of WIMPs.

Gamma rays originate from a multitude of high-energy sources, such as black holes and exploding stars. But current theory suggests they can also come from WIMPs, which are massive particles that do not emit or absorb light. Such particles are predicted by supersymmetry, a theory that extends the highly successful Standard Model of particle physics. 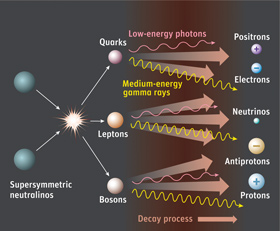 According to supersymmetry, WIMPs act as their own antimatter particles. When two WIMPs interact, they annihilate each other and release a flurry of secondary particles as well as gamma rays. Using GLAST, scientists hope to find these high-energy signatures of dark matter in our galaxy. If they succeed, this discovery will help solve one of astronomy's grandest mysteries.

Image right: According to supersymmetry, dark-matter particles known as neutralinos (which are often called WIMPs) annihilate each other, creating a cascade of particles and radiation that includes medium-energy gamma rays. If neutralinos exist, the LAT might see the gamma rays associated with their demise. Credit: Sky & Telescope / Gregg Dinderman.
+ High resolution image

"With GLAST, we hope to actually see individual dark-matter annihilations," says theoretical physicist Michael Peskin of the Stanford Linear Accelerator Center (SLAC). Ted Baltz, a Kavli Institute for Particle Astrophysics and Cosmology (KIPAC) researcher who also works on GLAST, adds, "GLAST has the real possibility of making a fundamental contribution to understanding what galaxies are made of."

Even though dark matter interacts much more weakly than ordinary matter, dark matter is not spread out evenly through space and should form clumps in and around galaxies. If dark matter is in fact composed of WIMPs, this clumping would improve the chances of these particles meeting and annihilating, producing steady streams of gamma rays detectable by GLAST’s Large Area Telescope.

The trick will be distinguishing gamma rays produced by dark-matter annihilations from those generated by numerous other sources in the Universe. To differentiate between the two, researchers have established a set of four guidelines:

If scientists find a signal with all of these characteristics, chances are good that they have found a source of WIMP annihilation.

GLAST will be running in parallel with numerous other dark-matter experiments, such as searches for WIMP collisions in underground detectors and attempts to manufacture WIMPs at the Large Hadron Collider (LHC) at the European Center for Nuclear Research (CERN) in Switzerland starting in 2008. Given this activity, many scientists are confident the existence of WIMPS will be confirmed or refuted in the next few years.

"If GLAST detects these signals, it will be enormously important for both particle physics and astrophysics. It will represent a huge intellectual achievement and a big leap forward in our understanding of the Universe on the largest and smallest scales simultaneously," said Lynn Cominsky of Sonoma State University in Rohnert Park, California, leader of GLAST’s education and public outreach team. by Marcus Woo
›Back To Top