Cosmic Rays and Supernova Remnants
In the early 1900s, Austrian physicist Victor Hess discovered that particles from deep space incessantly bombard Earth's atmosphere, producing showers of secondary particles that reach the surface. In one of the great misnomers of science, these particles came to be known as "cosmic rays." But in reality, they have nothing to do with light rays. Instead, they are subatomic particles that have been accelerated to nearly the speed of light by energetic astrophysical processes whose sources have remained a mystery.

But after GLAST's Large Area Telescope (LAT) collects data for a few years, there's a very good chance that scientists will solve at least part of this mystery. For decades, scientists have pointed to a likely culprit for the acceleration of lower-energy cosmic rays: supernova remnants. These gaseous structures form when blast waves from exploding massive stars plow through interstellar material and sweep it up into shells. The shock waves that form in supernova remnants have the right amounts of energy to accelerate protons and other particles to the levels of energies measured in the lower-energy cosmic rays striking Earth's upper atmosphere. Previous X-ray observations strongly suggest this is actually occurring. 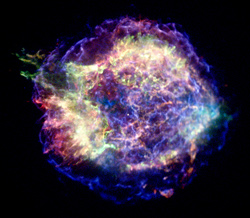 "Cosmic rays, the highest-energy particles in nature, are thought to be formed when stars collapse and produce tremendous shock waves. GLAST will test this theory by measuring the spectra of gamma rays from the remnants of supernovae, where cosmic rays should be abundant," says GLAST Interdisciplinary Scientist Charles Dermer of the Naval Research Laboratory in Washington, DC.

"The theory all seems right, but we've never been able to prove it. The LAT might just be the telescope that's able to do it," adds LAT science team member David Thompson of NASA Goddard.

According to theory, shock waves in supernova remnants can accelerate protons to energies 1,000 times higher than can be achieved by the largest particle accelerators on Earth. The protons then collide with nearby interstellar material, producing a cascade of secondary particles known as pions (which are more massive than electrons, but less massive than protons and neutrons). Neutral pions (those lacking an electric charge) decay quickly into gamma rays of a characteristic energy around 67 MeV, ideal for detection with the LAT.

When previous gamma-ray observatories looked toward the galactic plane, they saw an increase in gamma-ray flux right around 67 MeV, which proves that cosmic-ray particles are interacting with interstellar material throughout the Milky Way. "But we want to see that on a local scale," says Thompson. "We want to see it happening at the sources, which are thought to be supernova remnants. The LAT has the sensitivity and spatial resolution to do the job."

The LAT's energy range, however, is many orders of magnitude too low to enable scientists to decipher the origin ultra-high-energy cosmic rays, one of the great unsolved mysteries in astrophysics.


by Robert Naeye
›Back To Top