GLAST Safely in Orbit, Getting Check-ups 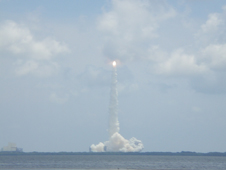 GLAST was successfully launched aboard a Delta II rocket from Cape Canaveral Air Force Station in Florida at 12:05 p.m. EDT on Wednesday, June 11.

For four weeks, engineers will continue to be busy around the clock turning on and checking out the various components on the spacecraft. "Things are looking good so far," said GLAST Deputy Project Scientist Julie McEnery from NASA's Goddard Space Flight Center, Greenbelt, Md. "We expect to turn the instruments on in about a week, and we can't wait to see the first gamma rays!"

Two days after launch, both of GLAST's solar arrays were rotated successfully. The solar arrays are the "wings" of GLAST that utilize the Sun's energy to power the spacecraft. That same day, flight software controlled heaters were enabled. Those heaters are important because they help GLAST to operate in the cold of space.