GLAST Has Eyes for Gamma Rays 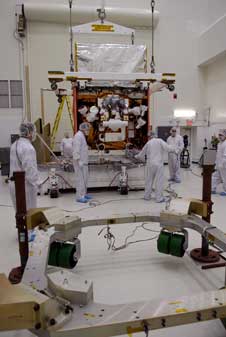 Earlier this month, GLAST arrived at the Astrotech payload processing facility near the Kennedy Space Center to begin final preparations for its May 2008 launch. Credit: NASA/Kim Shiflett

> Click for larger image.
Deciphering the genetic code of the universe is no easy task. Yet that's just what the Gamma-ray Large Area Space Telescope's Large Area Telescope (LAT) seeks to accomplish.

Integrated at the Stanford Linear Accelerator Center (SLAC) in Menlo Park, Calif., in 2005 and 2006 from hardware fabricated at laboratories all around the world, the LAT will use its 880,000 silicon strips to detect high-energy gamma rays with unprecedented resolution and sensitivity, filling in gaps in understanding left by previous missions and pushing new boundaries in particle physics and astrophysics.

"The LAT will give us a broad representation of the evolution of objects that are the highest energy accelerators in the universe," said SLAC Professor Elliott Bloom.

As GLAST orbits the Earth, gamma rays—emanating from jets of plasma streaming from enormous black holes, pulsars and other astronomical sources—will strike the LAT. By determining the time of each gamma ray's arrival, the direction from where it came and energy it carries—the fundamental quantities of astronomy—the LAT will yield a wealth of new data that will offer a glimpse into the fundamental nature of high-energy processes in the universe.

Gamma rays that encounter the LAT will first meet several layers of tungsten metal. Tungsten's massive atomic nuclei interact with the high-energy gamma ray in a way that creates a charged pair of particles: one electron and one positron. These particles travel in V-shaped trajectories, with the electron going one way and the positron going another, which are detected by the silicon-strip sensors positioned just below each tungsten layer. Later, these signals are reconstructed by algorithms to obtain the direction and time of the original gamma ray photon.

After traversing through tracking layers, the particles pass into a cesium iodide imaging calorimeter and generate tiny amounts of light—flashes with brightness proportional to the particles' energies.

Through this multi-step process, the LAT will detect gamma rays with unprecedented sensitivity, which will allow detection of thousands of new sources and possibly even new classes of sources.

In the mid-1990s, the instrument's predecessor, the Energetic Gamma Ray Experiment Telescope (EGRET), made the first sky survey in high-energy gamma rays with a sensitivity up to a few giga-electron-volts (GeV) of energy.

The LAT must be launched into space because the gamma rays that it is designed to detect are blocked by the Earth's atmosphere. The problem of detecting relatively rare gamma rays in the midst of a continual cacophony of cosmic rays is reduced by an additional detector surrounding the LAT’s 16 tracker towers and calorimeters, and then left to sophisticated data analysis, similar to that found in high-energy physics accelerator experiments. The first round of analysis will be performed by flight software on the LAT, which filters out about 80 percent of background signals. This will ensure that fainter sources will stand out more cleanly against the thousands of signals expected every second and will reduce the volume of data sent back to earth. Further, more detailed, analysis will then be performed in ground processing of the LAT data, which will be delivered to SLAC several times per day during the mission.

"When you create an instrument that goes a factor of 100 beyond what you've done previously," said University of California-Santa Cruz Professor Bill Atwood, "the space for discovery becomes enormous."

GLAST is a collaborative mission between NASA, the U.S. Department of Energy, international partners from France, Germany, Italy, Japan and Sweden, and numerous academic institutions from the U.S. and abroad.