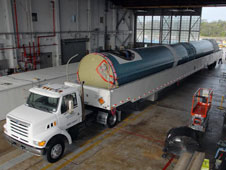 The United Launch Alliance Delta II rocket's first stage was revealed after the cover was removed from the truck that delivered it. It was delivered during the week of Feb. 4. Credit: NASA
> Click here for larger image.
The first stage of the Delta II rocket that will be used to launch the Gamma-Ray Large Area Space Telescope (GLAST) into space in May has arrived at Hangar M on the Cape Canaveral Air Force Station (CCAFS) in Florida. It joins the second stage, which is already at CCAFS.

"This first stage, along with the second stage and the solid rocket motors, will provide the ride that the GLAST observatory needs to reach its mission orbit," said Kevin Grady, the GLAST Project Manager at Goddard Space Flight Center, Greenbelt, Md. "With the arrival of this launch vehicle hardware at the Cape, the beginning of this extraordinary high energy physics era in space is just a handful of months away."

GLAST is a powerful space observatory that will explore the most extreme environments in the Universe, where nature harnesses energies far beyond anything possible on Earth. It will search for signs of new laws of physics and what composes the mysterious Dark Matter, explain how black holes accelerate immense jets of material to nearly light speed, and help crack the mysteries of the stupendously powerful explosions known as gamma-ray bursts.

GLAST is scheduled to be launched on May 16 from Launch Pad 17-B on CCAFS. After on-orbit checkout, NASA is planning to rename the observatory. A suggestion box that is now open to the public has been established. To submit a suggestion, fill out the information at: http://glast.sonoma.edu/glastname. The closing date for suggestions is March 31.

NASA’s GLAST mission is an astrophysics and particle physics partnership, developed in collaboration with the U.S. Department of Energy, along with important contributions from academic institutions and partners in France, Germany, Italy, Japan, Sweden, and the United States.