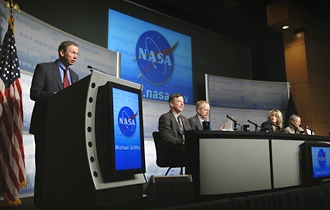 Image left: NASA Administrator Michael Griffin outlines the President's budget for Fiscal Year 2007 at a news conference from the agency's headquarters in Washington, D.C. The administrator was joined by the heads of NASA's four mission directorates to explain how the proposed $16.8 billion dollar budget supports the Vision for Space Exploration. Photo Credit: NASA/Bill Ingalls.

"This morning, the President announced the Fiscal Year 2007 budget request for the entire federal government. This includes a $16.8 billion request for NASA, which represents a 3.2 percent increase over the 2006 budget appropriated for NASA, not counting our emergency supplemental needed to recover from Hurricane Katrina.

This budget, with an increase over last year's appropriation, demonstrates the President's commitment to carrying out the Vision for Space Exploration, which he articulated from this stage just over two years ago, and especially so in view of the other pressures on the government in the wake of the greatest natural disaster our nation has faced and the war on terrorism.

However, let me put our budget in overall perspective. NASA's budget is roughly 0.7 percent of the overall federal budget. This is a modest investment to extend the frontiers of space exploration, scientific discovery, and aeronautics research. With it, we enhance American leadership, our safety and security, and our global economic competitiveness through the technological innovations stemming from our space and aeronautics research programs. As we look forward to the events that will define this century and beyond, I have no doubt that the expansion of human presence into the solar system will be among the greatest of our achievements. I am proud that America, through NASA, leads the way.

But leadership means setting priorities of time, energy, and resources, and leadership means making difficult decisions based on the best facts and analysis available. One plain fact is NASA simply cannot afford to do everything that our many constituencies would like us to do. We must set priorities, and we must adjust our spending to match those priorities.

Setting these priorities and formulating the budget to reflect them is, in many respects, the foremost policy decision a NASA Administrator makes in the course of working with the White House and Congress. Our democracy demands a healthy debate on such funding priorities, and I believe that this budget provides a balanced approach in setting them.

NASA is implementing the priorities set by the President and the Congress within the resources provided. This budget demonstrates our national commitment to implementing the Vision for Exploration. It balances NASA's mission to complete the assembly of the International Space Station and fulfill our international partner commitments, while using the minimum number of Shuttle flights to do so. It supports our goal of bringing the Crew Exploration Vehicle online no later than 2014, and potentially much sooner. It provides over $5.3 billion in funding for NASA's science missions and over $724 million for aeronautics research. The FY07 budget also provides almost $500 million for cross-agency support programs, such as science and math education, innovative partnerships for NASA to leverage commercial industry, and development of the unified agency-wide management systems to get NASA's finances in better order. NASA must be a good steward of the taxpayer's money, and we must change the way we have done business in the past in order to achieve this goal.

We must seek innovative ways to leverage, to the maximum extent practicable, the investments being made by commercial industry and through international partnerships. We must plan executable programs with priority given to the required timing and affordability of needed capabilities. As I have testified previously to the Congress, we will go as we can afford to pay, and we will set priorities for our time, resources, and energy. For example, NASA's exploration architecture cannot afford the robust space nuclear R&D program that was previously planned. Thus, rather than engaging in them halfway, we have cut back those efforts. But because it is important in the long run, we will seek to leverage the work of other nations which have developed small nuclear reactors that could be applied to space.

Following Congressional direction to strive to bring the CEV online as soon as possible after 2010, as part of a balanced exploration program, NASA is cutting back on Space Station research in order to allocate funding to the CEV. However, as designated by the NASA Authorization Act, the International Space Station is a National Laboratory. Therefore, NASA seeks partnerships with other government agencies and the commercial sector to conduct research onboard the station.

So, let me now address NASA's plans within the five year budget horizon to carry out the task of assembling the International Space Station with the fewest possible Space shuttle flights, and then to retire the Shuttle in 2010. As I testified before this Congress last November, we were working through the problem of a $3 to $5 billion shortfall for FY2006 to FY2010 to carry out these ISS assembly missions. In previous years, NASA's Shuttle budget had assumed certain placeholder numbers in the out years that were clearly insufficient to complete the mission. We have solved this problem with the Shuttle funding shortfall in the 2007-11 budgets, again consistent with the policy direction provided by the President and Congress. We still have challenges in implementing this plan, so let me delve into it a bit. When I presented NASA's exploration architecture to the Congress and public last September, the budget profile for that architecture was simply the FY 2006 budget run out identified for Exploration Systems, not other parts of the NASA budget.

That view of the exploration budget did not account for other problems with the shuttle budget in the out years. We've worked hard to address this problem more holistically in the FY 2007-11 budget formulation. We also are delving more deeply into the strategic implications of using shuttle-derived launch systems for the Crew Launch Vehicle and Heavy-Lift Launch Vehicle. We believe that significant synergies and contract efficiencies between subsystems, personnel, resources, and infrastructure can be found. Thus, we are applying some funds from the exploration budget profile between now and 2010 to the shuttle's budget line to ensure the shuttle and station programs have the resources necessary to carry out the first steps of the Vision for Space Exploration. The greatest management challenge the agency faces over the next five years is the transition from retiring the shuttle to bringing the crew exploration vehicle on-line.

The implications of this program and budget synergy between the shuttle and CEV launch vehicle programs are the following: The budget is sufficient to bring the CEV online by 2014 at the latest, and possibly much sooner. NASA has asked industry for proposals to bring the CEV online as close to 2010 as possible and not later than 2012. In the months ahead, NASA will receive those industry proposals, evaluate them for technical and cost viability, and define savings from these integrated shuttle and exploration budget profiles. The bottom line is this: NASA's plans are to bring the CEV online as close to 2010 as possible, but not later than 2014. Given the analysis we have today, we cannot set a more definitive target date for the CEV to our stakeholders in the White House and Congress. But I believe that with the budget proposed today NASA and industry have a real opportunity to make the CEV operational much sooner than 2014. The transition between the shuttle retirement and bringing the CEV online requires NASA and industry to work as a team in the months and years ahead. NASA is in source selection with the CEV procurement, and we will not go beyond my comments here.

I will now turn to NASA's space science portfolio, which remains one of the nation's crown jewels. The agency's budget for space and Earth science has seen significant budget increases for over a decade, far surpassing any growth in NASA's top-line budgets during those years. For FY 2007-11, we cannot afford such growth for science within the context of a top-line budget that is growing at essentially the rate of inflation. Thus, NASA's science budget will grow by 1.5 percent in FY 2007 and 1 percent thereafter between 2008 and 2011.

As we work closely with our international partners and the science community, NASA's Science Mission Directorate remains a world leader, operating 56 space missions with an annual budget of over $5.3 billion per year. The FY 07 budget provides funds for an armada of satellite missions to make scientific measurements of changes in the salinity of our oceans and land resource uses, test instruments for the next-generation of polar-orbiting weather satellites, monitor solar flare impacts on the Earth's magnetosphere, landing the next generation of rovers on Mars, and peering into the farthest reaches of the universe with the Hubble and James Webb space telescopes.

Turning to Aeronautics Research, the $724.4 million allocation in the President's budget will begin the process of re-establishing NASA's dedication to the mastery of our core competencies in subsonic, supersonic, and hypersonic flight. We have begun the development of aeronautics research programs that are focused, relevant, and of interest to a broad research community in government, industry, and academia.

Beyond the purely budgetary perspective, I would now like to discuss NASA's most important resource: our people. The NASA management team has been working on the issues and means to rebuild NASA so as to have 10 healthy centers known for technical greatness. We continue to define program management and research roles and responsibilities for each center in carrying out NASA's missions of space exploration, scientific discovery, and aeronautics research.

I will ensure that all of our centers contribute to NASA's primary mission of space exploration and discovery. We are beginning the process of assigning specific research programs and projects to appropriate NASA centers. We are not done, but we are taking steps in the right direction. We have many challenges in the agency, but none more important than the technical excellence of NASA's workforce. Likewise, we are beginning to address the issues of NASA's facilities and physical assets. We have a lot of work cut out for us in the coming months and year ahead."