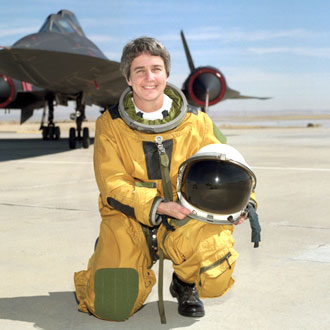 The crash of an aerobatic plane in Oklahoma has claimed the life of Marta Bohn-Meyer. Bohn-Meyer was chief engineer at NASA's Dryden Flight Research Center at Edwards Air Force Base, Calif., and a widely known precision aerobatic pilot.

Bohn-Meyer, 48, died Sunday morning when the Giles G-300 she was flying crashed as she was beginning an aerobatic practice routine near the C.E. Page Airport in Yukon, Okla. Yukon is a suburb of Oklahoma City.

The crash is being investigated by the Federal Aviation Administration.

In a message to Dryden staff this morning, center director Kevin Petersen said he was "deeply saddened" upon hearing of Bohn-Meyer's tragic death.

"Marta Bohn-Meyer was an extraordinarily talented individual and a most trusted technical expert and manager at NASA Dryden," Petersen said. "She committed her life and career to aviation and the advancement of aeronautics and space in the United States. We at Dryden will miss her tremendously. All the hearts and prayers of NASA Dryden go out to her husband Bob and Marta's family," he added.

Bohn-Meyer had been employed as an aeronautical research and operations engineer at Dryden since 1979 following her graduation from Rensselaer Polytechnic Institute, Troy, N.Y., with a bachelor's degree in aeronautical engineering. She was appointed chief engineer at Dryden in October 2001 after serving in a series of increasingly responsible positions. These included director of flight operations, director of safety and mission assurance, deputy director of flight operations, deputy director of aerospace projects and project manager for the F-16 XL Supersonic Laminar Flow Control project.

From 1976 to 1979 she was a student in a cooperative education program at NASA's Langley Research Center, Hampton, Va. There she participated in rotorcraft research, and wind tunnel and flight safety projects associated with small civil aircraft.

During her career at Dryden, Bohn-Meyer worked on a variety of research projects, specializing in flight test operations, developing test techniques, and laminar flow research. Among these projects were flight tests of space shuttle thermal protection tiles with a NASA F-104, B-57 gust gradient evaluations, and the F-14 aileron-rudder interconnect and variable sweep transition laminar-flow programs, in addition to her work on the F-16XL laminar flow project before becoming project manager.

Bohn-Meyer was the author of several publications and reports on sailplane performance, laminar flow experiments and composite construction.

Bohn-Meyer was one of two flight engineers assigned to fly in the SR-71 high-speed flight research program at Dryden. She was the first female crewmember from NASA or the Air Force -- and the second woman -- to fly in one of the triple-sonic SR-71s. NASA used the SR-71s to obtain high speed, high altitude data that can be applied to improve the designs of future civil and military aircraft.

Bohn-Meyer was an FAA-certified flight instructor and listed competitive aerobatic flying, aircraft building, and classic car restoration among her hobbies.

Among other honors, in 1996 she received the NASA Exceptional Service Medal "for exceptional service in flight operations and project management in support of several national flight research programs." She was also awarded the Aerospace Educator Award in 1998 from Women in Aerospace and in 1992 received the Arthur C. Fleming Award in the Scientific Category.

A frequent participant in education programs, particularly for girls, she was a role model for young women interested in entering into technical fields.

For more information about NASA on the Internet, visit: