RELEASE : 05-116 NASA Engineer Ready to 'Bring The Noise' of Liftoff 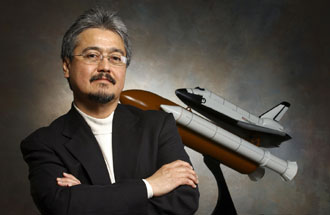 As Space Shuttle Discovery gets closer to launch, the din of preparations across the country is music to veteran engineer David Martin's ears.

"There's been a hush over our work for two years," Martin said. He is manager of the Solid Rocket Booster Project Office at NASA's Marshall Space Flight Center (MSFC) in Huntsville, Ala. "The excitement has been rising for some time, but now it's like someone is turning up the volume everywhere you go," he added.

Martin expects the rising swell of excitement to culminate later this summer in the roar of Discovery's big engines. The noise that will mark the start of STS-114: Space Shuttle Return to Flight, and launch the next phase of America's exploration of the cosmos.

Martin's organization at Marshall oversees the Shuttle's powerful, reusable Solid Rocket Boosters. During the first two minutes of launch, the 149-foot-tall, 12-foot-diameter boosters generate 85 percent of the thrust needed to lift the Shuttle to orbit. The boosters separate from the Orbiter and drop into the sea for recovery, when their task is completed.

Martin's team handles every element of the boosters, from design, certification and testing of all components to post-flight recovery and refurbishment.

The team managed some important Shuttle modifications during the past two years. One particular upgrade worth noting is the safety modifications to the "bolt-catcher." This protective mechanism captures half of the forward-attach-point connecting bolt during booster separation from Shuttles the External Fuel Tank. Martin's team also conducted testing and recertification of the boosters' External Tank attachment rings and aft struts, which fasten the rear of the boosters to the tank.

Born in Omaha, Neb., Martin is the son of a former U.S. Air Force pilot, who met his wife while stationed in Japan during the Korean War. Martin's two older brothers were born in Japan. Martin and his younger sister were born after the family moved back to the U.S. His father left the service to become an Apollo-era NASA contract engineer. Martin suspects that's where he picked up his early awareness of America's space program.

In 1981, during his second year of engineering studies at the University of Alabama in Huntsville, Martin enrolled in NASA's Cooperative Education Program. He became an engineering trainee at NASA's Kennedy Space Center (KSC), Fla. He went to Florida just in time to be a firsthand witness for STS-2, the second Space Shuttle flight.

"That's when I fell in love with NASA," he said.

Martin received his bachelor's degree in electrical engineering in 1983 from the University of Alabama in Huntsville. After graduation, he joined the Science and Engineering Directorate at MSFC as an electronics hardware design engineer. In 1985, he was appointed as a chief engineer for key MSFC, managed microgravity experiments, tests conducted in the near-vacuum of the Space Shuttle environment.

He went back to KSC in 1987 and spent the next decade there as a project engineer and Shuttle element team lead, providing on-site management of hardware for the External Tank and the Solid Rocket Boosters. He coordinated the transfer of booster components from the prime contractor to KSC, while also providing oversight to the design, manufacturing, processing, integration, test and post-flight recovery of the boosters at the Cape.

In 1997, Martin returned to MSFC as technical assistant for the Solid Rocket Booster project, leading efforts to merge the project into NASA's consolidated Space Flight Operations Contract. Managed at NASA's Johnson Space Center in Houston, the contract handles all Shuttle hardware processing and integration prior to flight. Continuing to assume greater responsibility within the organization, Martin was appointed technical management representative on the Space Flight Operations Contract in 1999. He accepted his current position in 2002.

Martin has received numerous NASA awards. In 1998, he received the Silver Snoopy Award, a special honor bestowed by NASA's Astronaut Corps on men and women who provide key support for the Space Shuttle and human spaceflight missions. In 1995, Martin received NASA's Manned Flight Awareness Award, one of the highest service honors awarded by NASA.