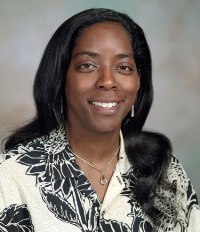 Left: Marshall was selected for her professional achievements in science and engineering.

NASA aeronautical engineer Laurie Marshall is being honored by the National Society of Black Engineers (NSBE) with their 2005 Golden Torch Award for Outstanding Woman in Technology of the Year.

Marshall was selected for her professional achievements in science and engineering. According to the Society, the Golden Torch Awards honor, "the best and brightest technology professionals in government, business and academia." Marshall has participated in several research projects at the NASA Dryden Flight Research Center (DFRC), Edwards, Calif. She served as chief engineer for the third flight of the X-43A hypersonic vehicle in November 2004. The project validated supersonic-combustion ramjet (scramjet) propulsion technology.

Marshall began her NASA career in 1992, when she served an internship in the Aerodynamics Branch at DFRC. She accepted a permanent position in 1993, following graduation from the University of California at Davis with mechanical and aeronautical engineering degrees. She earned an Engineer-in-Training license in 1994. She received a master's of science degree in mechanical engineering from California State University at Fresno in 1998.

Marshall will receive her award at the 8th annual Golden Torch Awards ceremony in Boston on March 24 during the 31st NSBE convention. For more information about the Society, visit:

For information about NASA on the Internet, visit: