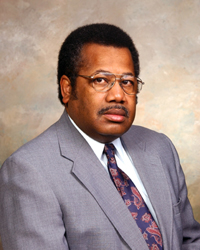 Dallias Pearson has spent his career launching big vessels, first in the U.S. Navy and then in the U.S. space program.

Pearson is a technical assistant in the Automated Systems and Automated Rendezvous and Docking Division of the Engineering Directorate at NASA's Marshall Space Flight Center (MSFC) in Huntsville, Ala. He is gearing up to play a key role in one of NASA's most exciting ventures, further exploration of our solar system. Pearson's office is responsible for ensuring space transportation systems' technology is properly designed, developed and flight-ready.

"This is an exciting time and opportunity for us; one that could shape how we explore other planets in the solar system, as we move forward with the Vision for Space Exploration," Pearson said.

Pearson is responsible for vehicle avionics system analysis and software power systems for such NASA spacecraft as the Demonstration of Autonomous Rendezvous Technology (DART). DART is a flight demonstrator providing a key step in establishing automated human-free rendezvous capabilities through the use of onboard computers and sensors.

Pearson's projects also include the Orbital Express, scheduled for flight during 2006 and ground-level research to support development of the Crew Exploration Vehicle (CEV). The CEV is part of NASA's Project Constellation. The project is developing the next generation of space vehicles that will send humans to the moon, Mars and beyond.

Before arriving at NASA, Pearson's career took an interesting turn. Eager to start working, he left college in his freshman year and moved to Boston to work at the Boston Naval Shipyard. He installed radar equipment and routed cable for electronics, power and weapons aboard Navy ships. But it was the work he did with a pen and paper, while at the shipyard, that helped him shape his career.

"My Navy responsibilities included drafting drawings for aircraft hardware," Pearson said. "It was fun work, and it helped me narrow down what I wanted to do with my life," he added.

Pearson returned to school and graduated in 1973 from the Tuskegee Institute with an electrical engineering degree. His first job was with SCI Systems, Inc., in Huntsville, Ala. as a NASA contractor. For SCI, Pearson worked on his first Mars-related NASA mission, the Viking program. He designed part of the spacecraft's circuit system, including the plated wire memory bank on Viking 1 and 2.

Pearson joined NASA in 1974 as a civil servant. He worked as an electrical design engineer for the Marshall Science and Engineering Avionics Organization, which oversaw power distribution, power supplies and wiring harness design for spacecraft and launch vehicles.

Pearson has served in managerial and leadership positions at MSFC. In 2001, he was named deputy manager of the Space Transportation Directorate's Program Planning and Development Office. From 2003-2004, he was manager of the office and led the continued development of expendable launch vehicles.

Pearson has received numerous group and achievement awards for his work, including the NASA Medal for Exceptional Service in 2003, and MSFC Director's Commendation in 1998.

"The excitement across NASA these days is contagious," Pearson said. "Our new Vision has not only focused our talents on one common goal, but it also gives the next generation of space scientists and engineers their own path to explore. It's great to see," he added.