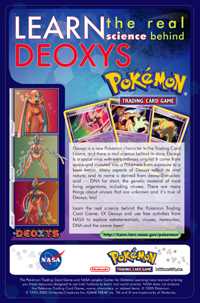 Since 1996, children have collected and traded over 13 billion Pokémon Trading Cards worldwide. The recent release of the Pokémon Trading Card Game: EX Deoxys and this collaboration with NASA provide an opportunity to teach kids about the real world science behind this Pokémon.

Deoxys is a space virus with extraordinary origins. It came from space and mutated into a Pokémon when exposed to a laser beam. Deoxys' name is derived from deoxyribonucleic acid or DNA, the genetic material of most living organisms, including viruses. The STEM learning units have been developed based on the new EX Deoxys Trading Card Game.

Posted on NASA's Kids Science News Network (KSNN) website, five interactive activities are accessible to students and teachers in the classroom. They can learn real science from the Pokémon Trading Card Game and use free activities developed by NASA that teach them about extraterrestrials, viruses, meteorites, DNA, and the ozone layer.

As part of the program, Nintendo of America Inc. produced "awareness bracelets" and postcards that were distributed to educators nationwide.

The Pokémon Trading Card Game, fueled by organized play programs around the world, has spurred global sales of more than 13 billion cards to date, while the Pokémon animated series on Kids WB!, now in its seventh season, consistently ranks within the top three shows for boys 6-11 years old.