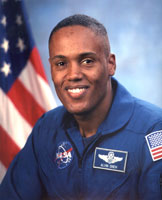 Alvin Drew didn't always want to be an astronaut, but after watching the Apollo 7 mission, he knew what he wanted to do with his life. At the ripe old age of 5 ½, Drew decided he wanted to fly in space.

Drew was born and raised in Washington. He credits his parents and teachers with his success. They, according to Drew, "…had to suffer me most during my growing up, but they also had the greatest influence. They impressed on me, not only that I could do anything in life I wanted, but that I also had an obligation to pursue things that inspired me."

Drew's flying career began at the United States Air Force Academy. He received his commission as a second lieutenant in May 1984. He completed Undergraduate Helicopter Pilot Training and earned his wings at Fort Rucker, Ala. in March 1985.

His initial assignment was to the HH-3E helicopter flying combat rescue. He transitioned to the MH-60G helicopter and was assigned to the Air Force Special Operations Command. He flew combat missions in operations Just Cause, Desert Shield/Desert Storm and Provide Comfort. He completed USAF Fixed-Wing Qualification in April 1993 and the United States Naval Test Pilot School in June 1994. He has commanded two flight test units and served on the Air Combat Command Staff. He is a Command Pilot with 3000 hours flying time in more than 30 types of aircraft.

In July 2000, Drew was selected as a mission specialist by NASA and reported for training in August 2000. Following the completion of two years of training and evaluation, he was assigned technical duties in the Astronaut Office Station Operations Branch, Houston. He will serve in technical assignments until assigned to a space flight.

Drew has worked hard throughout to achieve his goals and advises young people to,"...understand any goal is attainable, but it becomes a matter of how hard you have to work at it. The sooner you know what you want to do or want to be in life, and the sooner you start working at it, the more you can spread out the work, so no one challenge is insurmountable. But, no matter what your pursuits in life, having good habits in studying, staying fit and healthy, and developing good character will always aid you on your journey."